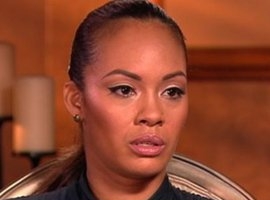 Basketball Wives reality star Evelyn Lozada addressed her estranged husband Chad “Ochocinco” Johnson in an interview on Nightline Friday evening. Johnson was arrested for a domestic dispute with Lozada in which he reportedly headbutted her.

In the interview Lozada characterized Johnson as a good guy and said the incident was “a bad choice that destroyed his life … But it was his choice, it wasn’t mine.” Lozada added that she was “afraid” of Johnson but hopes he is getting the help he needs.

As a result of the dispute, Johnson, who had been a controversial player on the Miami Dolphins was fired by the NFL team. VH1 also canceled the couple’s spin-off reality television show which was scheduled to air in the fall.

Lozada said the incident occurred after she found a receipt for a box of condoms three weeks after their wedding. An argument that turned violent ensued thereafter. Lozada filed for divorce the next week.