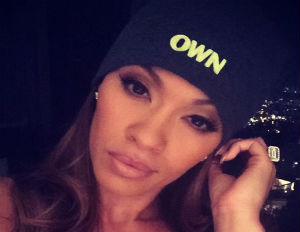 According to recent reports, Evelyn Lozada from Basketball Wives has landed a new reality show on Oprah’s OWN network. The show will focus on her role as a mother and on her children and her thrilling relationship with fiancÃ© L.A. Dodger’s player Carl Crawford.

Lozada took a long break from reality television after being physically attacked by her ex-husband, Chad Ochocinco. After years of displaying on television a tumultuous relationship for all of America to see, Ochocinco, who also goes by the last name Johnson, was finally arrested for head-butting Lozada. The VH1 show was canceled immediately afterward.

Lozada’s new show is tentatively titled Evelyn, and she is set to be executive producer. The star posted a photo on Instagram this morning, captioning it, “I finally have a new home. #EveOnOwn.â€ She also dropped several hints that the show will begin airing in July.

What do you think of what you’ve heard so far about the show? Will you tune in? Share your comments with us below.

Interview and Get the Job With These Winning Tips