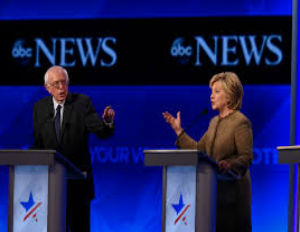 Tonight Hillary Clinton and Bernie Sanders will meet in Miami to face off for the latest Democratic primary debate.

If you’re having trouble keeping up with this election cycle’s jam-packed debate schedule, we’ve got you covered.

Here’s the BE Politics guide to tonight’s debate:

The debate will be aired in Spanish on Univision and in English on CNN. You can also live stream it on Univision.com, WashingtonPost.com, CNN.com, and FUSION.net

Univision and The Washington Post are co-sponsoring tonight’s debate.

Maria Elena Salinas, and anti-Trump champion Jorge Ramos of Univision will moderate the debate, joined by Karen Tumulty from the debate’s co-sponsor, The Washington Post.

1. Sanders on the Rebound

Sanders will enter tonight’s debate less than 24 hours after his surprising, upset win in Michigan on Tuesday night. Although Sanders defied the polls that had Clinton with a double-digit lead, he is still largely trailing Clinton in the delegate count. Sanders is also struggling to attract minority voters, as evidenced by Clinton’s Super Tuesday domination with black voters. Because tonight’s debate is being broadcast live in Spanish on Univision, it would make sense for Sanders to try to make a play for Latino voters.

Univision is hosting tonight’s debate, so expect a lot of talk surrounding how each candidate plans to combat Republican efforts against immigration reform. Clinton will most likely revisit her critique of Sanders voting against a 2007 immigration bill.

Today, the RNC filed two lawsuits to receive all texts, e-mails, and forms of communication sent to or from Clinton and her 2016 presidential campaign. Although Sanders and Clinton have repeatedly brushed aside the media firestorm surrounding Clinton’s use of a private server during her time as Secretary of State as partisan nonsense, it would be pretty surprising if the topic doesn’t surface tonight. The moderators may broach the subject as a matter of transparency, possibly questioning how each candidate’s potential administration would handle the ever-increasing demands for government transparency.