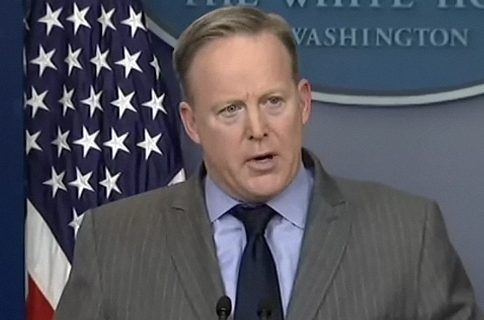 The video shows Spicer seated, signing copies of his new book at a bookstore in Middletown, Rhode Island. A black man standing a few feet away suddenly calls out to him and says, “Remember you tried to fight me?” Others in the store start chuckling—perhaps thinking the two were engaging in playful banter. Then the man says, “But you called me a nigger first” and the crowd’s mood instantly changes.

The black man in the video is Alex Lombard. He is accusing Sean Spicer of calling him the n-word and with trying to attack him when they both were high school students at Portsmouth Abbey, a boarding school in Rhode Island. In an interview with Black Enterprise, he goes into detail about his memory of Spicer, his subsequent conversation with the former press secretary after the incident, and why he felt the need for the confrontation.

“The first week I was [at Portsmouth Abbey] I was coming to chapel like we had to do every morning,” Lombard recalls. “I’m just walking and I hear somebody screaming ‘What is that f—–g nigger doing here?”

Lombard says he then looked to his left and saw someone running at him at full sprint, someone he insists was Sean Spicer. At the time, Lombard was a sophomore and Spicer, a junior.

“A couple of other students grabbed him and stopped him and he was screaming something else. That was really, basically it. I was frozen,” Lombard remembers. “I was scared; it frightened me. There were at least 20 to 30 other people out there—all of us walking. Everybody had on sports jackets, ties, shirts. I just made my way back to the dorm.”

Spicer, who is denying the incident took place, says he has plans to sue the Associated Press for reporting on the heated exchange at the bookstore.

“That’s a classic Trump move; suing the media,” says Lombard. His recollection is quite detailed about what took place at his school that day many years ago and his account comes across as credible. Lombard says Spicer even called him after the bookstore confrontation, and suspects he got his number from a mutual friend of theirs.

“He called me from a blocked number. The incident happened Friday…he called me Saturday evening.”

“When he called he was at the cusp of apologizing. He was right there at the threshold and he sounded extremely apologetic on the phone but he would not admit that was him,” Lombard says. “He said you are trying to hurt me because of your political [beliefs]—he said why are you waiting years later to do this, why now, am I over it, can I get over this?”

He says that the call ended on a peaceful note with Spicer somewhat bizarrely praising him with “you handled that situation better than a lot of people.”

Spicer, of course, is notorious for his combativeness during White House press briefings. Bullying in his youth seems to be in line with the behavior he exhibited during these briefings, including the time he “lambasted reporters with accusations of false reporting on the size of the crowds during the inauguration,” as per The Boston Globe.  His old boss has raised bullying to an art form. The president and those currently and formerly in his circle seem to adhere to the idea of strong-arming as a form of governing.

Even in his new memoir, The Briefing, critics observe that Spicer retains a pugnacious tone. “He rummages through the mistakes of major news outlets during the Trump era. The Washington Post, The New York Times, ABC News, CNN, and others are criticized for false reports or suspect claims, such as the time Spicer stood accused—falsely, he says—of expropriating a mini-refrigerator from junior staff members,” writes Erik Wemple for The Washington Post.

Still, Lombard, now married and a teacher and adviser at a community college, insists his action at the bookstore was not politically motivated and that accosting Spicer made him “absolutely” feel better  “I was just waiting to get [this] off my chest. I had been emailing [Spicer] on Facebook, Twitter, Instagram, and he never responded. This was nothing ever political, this was some townie stuff, you know what I mean? This was personal. We live in the same town and maybe it wasn’t the best forum I chose to confront him, but I was upset.”