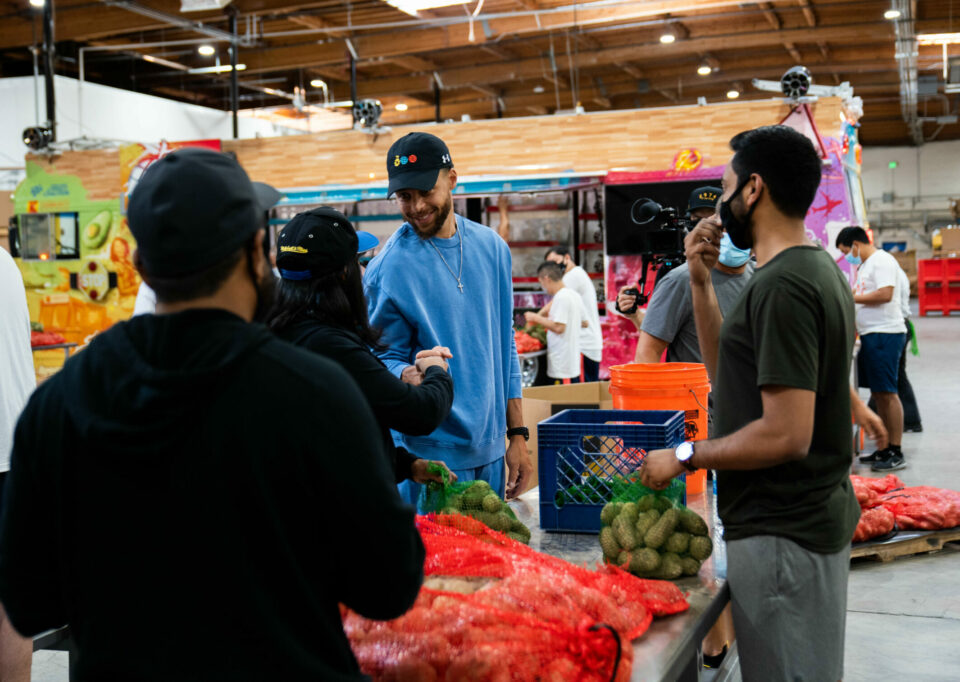 Four-time NBA champion Stephen Curry isn’t just about building his legacy on the court. Through community efforts, he’s growing and uplifting the youth of Oakland, California.

Following Curry’s shattering of Ray Allen’s career record for 3-point shots on Dec. 14, 2021, he released a surprise NFT drop a few days later commemorating the event. The 2974 NFT Collection consists of an image of each moment Curry made the 3-pointer so fans can own a piece of the legacy.

In a stunning move, 100% of the profits amassed from the NFT sales went to Eat. Learn. Play. and the Oakland community. According to a press release, the 2974 Collection has since produced over $4.4 million in trading volume since its launch eight months ago.

“From the very beginning, Stephen was adamant that all of the funds raised through the 2974 NFTs go directly to impact the community through Eat. Learn. Play.,” foundation CEO Christopher Helfrich tells BLACK ENTERPRISE. “And not just in the initial sales, there’s a percentage of every resell forever of these NFTs that supports Eat. Learn. Play. It’s going to be providing incredible resources for us for the indefinite future.”

Upon learning how many kids rely on the breakfast and lunch programs in school, the team at Eat. Learn. Play., along with the Oakland Unified School District and local Alameda County Community Food Bank, jumped at the chance to get meals distributed and fulfill the first pillar of its mission.

According to Curry, the pandemic response has been the most successful aspect of the Eat. Learn. Play. launch. Since July 2019, the foundation has helped distribute over 25 million meals into Oakland, where 38% of kids are food insecure.

“The other two pillars are not far behind in terms of creating a huge footprint in our community with literacy and obviously create safe spaces to play, which we’ve done,” Curry tells BLACK ENTERPRISE. “I think [we’ve done] seven or eight court refurbishments in different communities and created programs within those community centers to support coaches, teachers, and the kids.”

Per the Eat. Learn. Play. website, only 15.4% of Black students and 12.5% of Latino students in elementary school read at grade level.

As part of Curry’s 34th birthday celebration, 31 of the 2974 NFT Collection holders from across the globe were invited by FTX to meet and shoot hoops with the NBA star, each owners of an NFT image symbolizing the 31 3-pointers he’s made across his career during games on his birthday on March 14.

“This is what it’s all about,” Curry began his speech to the collection holders, after a tour of the old Golden State Warriors training court in Oakland. “It means the world…Even a couple years ago I had no idea this would be an opportunity. [This was] a moment to galvanize the community into change. What’s come of it has been amazing to see. Eat. Learn. Play. has been a very special place for me and Ayesha to impact the greater Bay Area, but especially Oakland, around those three pillars of a healthy childhood. We are now all the village that is supporting the next generation of talent.”

In addition to playing basketball with the greatest 3-point shooter of all time, the NFT holders got a chance to put in a volunteer shift with Curry’s nonprofit at the Alameda County Community Food Bank, bagging up produce and stocking up the Eat. Learn. Play. bus with new books while catching up with the star shooter.

Eat. Learn. Play. hopes to someday expand nationwide, but as a young nonprofit things have taken off faster than imaginable. Helfrich revealed that the organization has begun making significant investments in lower income communities in Columbus, Ohio, which they aim to be part of for the next decade. However, if they can serve as inspiration to other organizations, that would suffice for the 3-year-old foundation.

“If we can show other communities that we have a model that works, we would love to see buses in communities across the country where there’s great need. We approach this work with no ego,” Helfrich says.

“For these kids, that experience of ‘Oh my gosh, Ayesha and Stephen are gifting this to me, they care about me,’ I think that there’s something deep about that impact,” he says. “We try to make sure we give Oakland kids the best.”