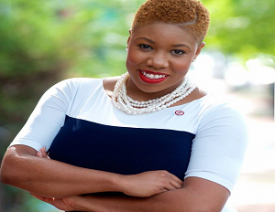 On Tuesday, presidential hopeful Bernie Sanders took a walking tour through Baltimore, meeting with the city’s civic and religious leaders to discuss the issues affecting the African-American community. Sanders ended his time in Freddie Gray’s neighborhood with a news conference to discuss what he had seen that day.

[Related: The GOP Has a Problem With … Empty Podiums]

The Sanders campaign had scheduled a press conference to share the events of the day with the media. Symone Sanders, national press secretary for the Sanders campaign, arrived and provided a quick summary of topics to be covered. She then asked reporters not to “ask about ISIS today,â€ because “it was not on topic.â€ The topic was, again, the issues affecting the African-American community.

His tweet was picked up by various outlets, who then began to report that Bernie Sanders did not want to talk about ISIS.

BlackEnterprise.com was able to obtain an exclusive quote from Symone Sanders, who offered clarity to the situation:

“I’m glad that the Senator got a chance to dialogue with the civic and religious leaders in Baltimore during the walking tour and that people were able to see him in his element. It’s unfortunate the way folks took comments that were clearly tongue-in-cheek, but we’re still veryÂ pleased with how the day went.

FacebookTwitterYoutube
← 10 Awesome Colleges for Female Entrepreneurs ← From the Mouths of Babes: How a Mother, Inspired by Her Son, is Diversifying World of Superheroes
×