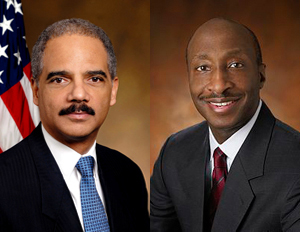 On Oct. 8, The Executive Leadership Foundation (ELF) will host its Annual Awards Gala honoring the individuals and corporations who support diversity and inclusion in business.

Holder will be presented with the Global Game Changer Award for his career in public service, as he is the third longest serving attorney general and the first African American to hold the esteemed position. Frazier, who was named Black Enterprise’s 2014 Corporate Executive of the Year, will receive the Achievement Award for his leadership as head of one of the largest bio-pharmaceutical companies in the world. He is currently one of only six black CEOs heading the nation’s largest corporations. Caterpillar, Inc. will receive the Corporate Award for its contribution to the advancement of black corporate executives.

“We are proud to honor the accomplishments of exceptional companies and individuals who represent black executive leadership at the highest level,â€ said Ronald C. Parker, president and CEO of The Executive Leadership Council. “Our honorees have paved the way for future generations of global black leaders to make impactful contributions to the marketplace and the global communities in which they serve.”

ELF is the charitable branch of The Executive Leadership Council (ELC), the pre-eminent organization comprised of the top black entrepreneurs, C-Suite and senior level executives, and board directors from Fortune 1000 and Global 500 companies.

This year’s event will mark the fifth anniversary of ELF’s Community Impact Initiative, which provides financial contributions to organizations to help improve educational opportunities for black students and create a greater pipeline for future black business leaders. So far, the initiative has contributed approximately $1.7 million to select nonprofits. The annual gala will also highlight the foundation’s scholarship program, which has impacted 10,500 undergraduate and graduate students.