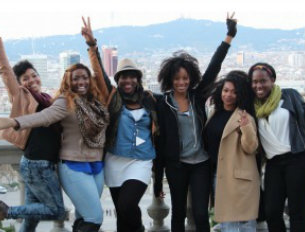 In 2012, when Sienna Brown returned to Brooklyn, New York, from a study abroad program at the Charles III University of Madrid, Spain, she landed a great job in communications and marketing. But something was missing. “That something was Spain,” said Brown. “I loved Madrid. It was an amazing experience–the lifestyle, food, openness and generosity of the people. So, in 2014, I moved back to Spain to work as a part-time English teacher and never looked back.”

To redefine the black experience in Spain and establish a connection with others in the community, Brown created Las Morenas de EspaÃ±a, which can loosely be translated as Brown Women of Spain. “Spaniards use the term ‘morenas’ to refer to women with darker skin or hair. Some people find the term offensive, but I really wanted to reclaim its use and take control of the word,” said Brown. “The site offers a sense of community, useful tips plus insight, as well as real stories and experiences of people of color who are actually living here. It’s something that was not readily accessible in the past and it was time for us to create the narrative for the media to share around the city and abroad.”

Las Morenas de EspaÃ±aÂ offers unique travel experiences and a network of expats and locals from all around the world. “We pride ourselves in curating unforgettable experiences. It’s an inside look at what Spain is like; how to “live like a localâ€ and learn more than what the tourist traps will show you.”

BlackEnterprise.com caught up with the Brown to chat about everything from food and culture to racism and flight deals.

BlackEnterprise.com: Where do you live in Spain? How is the cost of living compared to your hometown?
Brown: I currently live in Murcia, Spain, a city in the southeast region of the country. It’s quite wonderful and also has a lot of beautiful surrounding towns. It was a big change from living in Brooklyn, but I love the slower pace of life. The cost of living here is almost unbelievable, especially when you come from NYC. You can rent a one-bedroom apartment in Murcia for around 300-350â‚¬ a month (if not less). I took some time to break down the cost of living in the city on everything from fresh produce to rent and transportation here if anyone is interested about learning more.

Since relocating, what challenges have you faced? How did you overcome them?
The biggest challenge I’ve faced has been learning how to slow down. I’m from a place where everything is on level 100 and in Spain; especially in Murcia, life is on level 24. It’s been a conscious effort to have more of a work-life balance and appreciate the slower pace of everything in this country. Even though it’s a challenge, it’s been for the best and I couldn’t be more grateful.

How did you connect with other black men and women living in the city? Who is your target audience?
The African American community in Murcia is definitely growing, which is something that I’m quite excited about. Most of the people that I’ve connected with have reached out because of LMDES or through a small Facebook group that we have for my teaching program. The beauty of LMDES is that it’s able to connect people of color from all over the country, so I now know black men and women living in Madrid, Galicia, Valencia … the list goes on!

Do you think there is a difference between racism in Europe and the US?
I think the major difference between racism in Europe and in the U.S. is where it stems from. The U.S. has a long line of history of racism and slavery that we still see perpetuated in this day and age. In Spain, I think a majority of the time where something happens that is “racistâ€ or “discriminatoryâ€, it really stems from ignorance and a lack of importance in being politically correct. Quite often, in the states, we walk on eggshells when it comes to race. Everyone wants to say and/or do the right thing because it’s something that we’re nervous about.

Shonda Rhimes’ Year of Yes: Stay Open to the Unknown, You Might Be Surprised

FacebookTwitterYoutube
← Shonda Rhimes’ Year of Yes: Stay Open to the Unknown, You Might Be Surprised ← 6 Tips for Handling a Negative Company Review
×
'