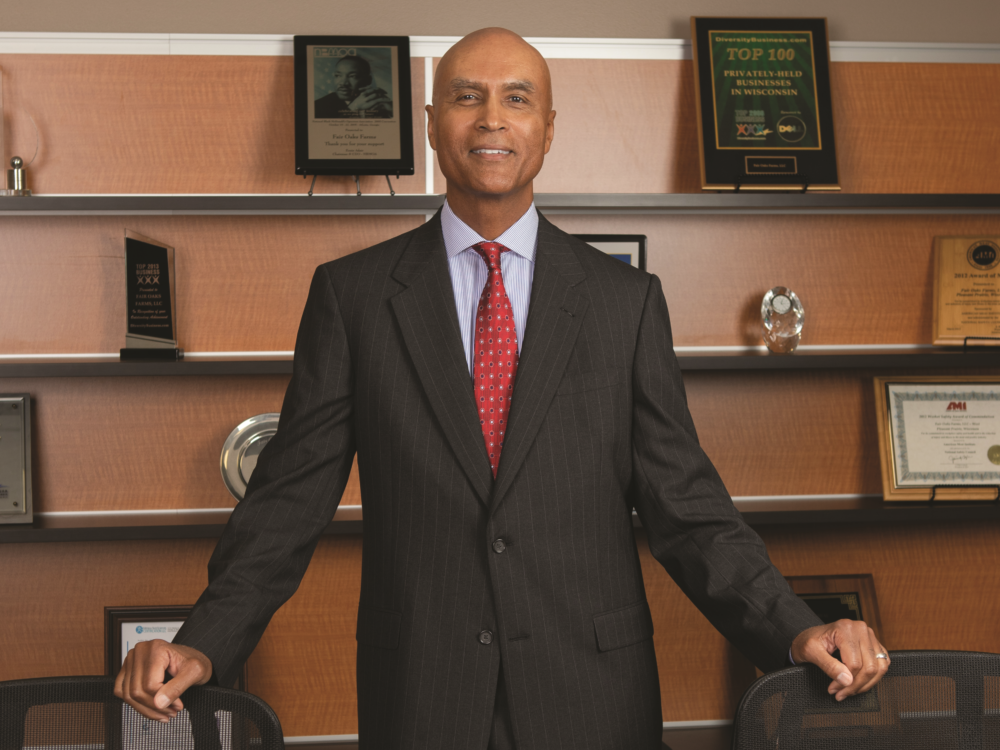 As CEO of Fair Oaks Farms, Michael L. Thompson, barely remembers the game that taught him one of his most valuable lessons in business and life. At 6 feet 9 inches, and 200 pounds, he was a forward for Cornell University’s basketball team during his senior year—No. 22. The life-shaping event occurred during the 1976-77 season when Cornell was in a fierce battle against Princeton University, the No. 1 team in the Ivy League Conference. Playing on their home court, Cornell was down by a single point. Cheers filled the arena as a teammate passed Thompson the ball.

With less than a minute left on the clock, he was well aware that making the basket would mean a Cornell victory. He takes the shot. Thompson had visualized the ball going in the hoop. In reality, it bounced along the rim and rolled out at the buzzer. Cornell lost the game by one point.

“I remember how depressing [it] was to lose,” Thompson recalls.

Back in the locker room, his coach pulled him aside. “You did your best, and you gave it all you had.” Then he slowly said, “But I need you tomorrow. We got another game tomorrow.”

Thompson says his coach’s encouraging jolt some 40 years ago stays with him to this day. As CEO of the Pleasant Prairie, Wisconsin-based food company [which is not affiliated with Fair Oaks Farms Dairy in Fair Oaks, Indiana], Thompson intimately knows what it means to win and lose but, most importantly, the value of constantly being in play. “It’s the same thing in business,” he says. “You don’t win in business every day. You have to pick yourself up off the floor if you have a bad day in the facility, which happens, and then go: ‘But tomorrow’s another day.’”

Adopting his leadership skills through sports, Thompson considers himself more of a coach than a CEO. In fact, his approach has earned Fair Oaks Farms MVP status within the food services sector. And he continues to use that teachable moment to stay focused on its winning recipe, which includes serving as a gold-standard model for successful collaborative partnerships between suppliers and corporate customers. Moreover, he has drawn on his experience as a team captain and playing in an environment that stresses comradeship and collective contribution to motivate his current squad of 257 managers and employees.

Today, Fair Oaks Farms is a Tier-1 supplier of cooked bacon, meatballs, pork, and turkey sausage to top-notch corporations including McDonald’s, Papa John’s, and its newest customer, Starbucks, throughout the nation, Canada, and other international markets. The company’s innovative practices and increased production capacity has yielded consistent year-over-year revenue growth. Since Thompson acquired 51% ownership of the company 16 years ago, Fair Oaks Farms has grown nearly a mouth-watering 300% and realized deeper penetration into international markets as it supplies meat products to some of the world’s leading restaurants and grocery stores.

Fair Oaks Farms is ranked No. 11 on this year’s BE 100’s list of the nation’s largest black-owned businesses with $342 million in revenues, up an impressive 11.4% from 2017 revenues of $307 million. Due to its consistent performance, obsessive customer service, and quality-focused leadership within an ultra-competitive market, Fair Oaks Farms has been named the 2019 BLACK ENTERPRISE Company of the Year.

Thompson represents one of those exceptional corporate executives who has successfully dribbled his way into entrepreneurship. At the height of his days as a “baller,” the Chicago South Side native attended St. Johns College near Wichita, Kansas; and then was recruited by Cornell University. Admitting that he “wasn’t a great basketball player although I could hold my own,” Thompson majored in business and economics. He was also aware that statistically, he was unlikely to join the NBA—or any other league for that matter—straight out of college given the competitive nature of professional sports. With that clarity, Thompson embraced his academic studies with the same tenacious spirit in which he attacked team practices.

Upon graduation in 1977, he gained his first job as a supervisor trainee at Aldi Food Corp., at the time a small regional grocery store chain headquartered in Batavia, Illinois. Eight years later, McDonald’s Corp. recruited him as a purchaser of protein, meat, and beef products. Little did he know that the move would lead to a 19-year career as a member of one of the nation’s most coveted corporate teams. Reflects Thompson: “Once in McDonald’s, I worked my way up through the supply chain, became a director, and then I switched to operations because McDonald’s was—and is—an operations-based company. It was an area that I thought I needed to have under my belt in order to grow. So, I left the supply chain and went into operations.”

The ambitious exec remained in operations for nearly 10 years, gradually rising through the ranks to regional manager at “The Golden Arches” to vice president of North America’s supply chain management, responsible for a reported $7 billion in annual purchases for the entire 14,000-plus restaurants in the United States and Canada.

Then in 2003, Thompson snatched the opportunity of a lifetime—a chance to own a company and become one of the top meat products suppliers in the nation. His advantage was his vast knowledge and unique insight into all aspects of the industry. Today, the “quick service” industry represents a commercial juggernaut. According to IBISWorld: “Over the past five years, the Fast Food Restaurants in the U.S. industry has grown by 3.8% to reach revenue of $256 billion in 2018. In the same timeframe, the number of businesses has grown by 2.0% and the number of employees has grown by 3.0%.” With more than 200,000 fast-food restaurants in the United States, it’s estimated that 50 million Americans eat at one of them every day, according to Franchise Help.

So Thompson proceeded to score big when he left McDonald’s to venture out as an entrepreneur after purchasing the majority share of Fair Oaks Farms for an undisclosed amount.

Fair Oaks Farms has always had a rich history as a leading minority supplier for McDonald’s as well as its inclusion among the ranks of the BE 100s. In 1985, the late African American entrepreneur Frank Brooks entered into a partnership with OSI Industries Inc., a major vendor of the fast-food giant, forming its predecessor, Brooks Sausage Co. After operating as one of the largest black food suppliers for a decade, Brooks sold his stake back to OSI. By 1995, former NFL star and businessman David Duerson acquired the controlling interest in the company that had been renamed Fair Oaks Farms and returned it to black ownership. Under the late Duerson, sales grew from $38 million in 1998 to more than $63 million in 2001 before he also sold his interest back to OSI.

Within two years, Thompson gained the majority share and assumed the helm of the company. With his insider’s knowledge and methodical approach, the newly minted entrepreneur brought his own transformative stamp to Fair Oaks Farms. “At the time, the company didn’t have a leader,” he explains. “I’ve always had a personal vision and dream about entrepreneurship and ownership of a company, and I thought this was a great opportunity and a way for me to leverage my McDonald’s experience with a company that’s doing business with McDonald’s.”

In watching his interaction with his team, the tall, slender Thompson is always focused on every detail, every nook and cranny of the operation. His body language is still, quiet, and approachable. But his friendly smile can’t hide the piercing gaze of a competitor determined to win the next championship. Thompson says of his entrepreneurial foray: “It was a risk, but I thought it was a good risk to take.”

Joe Freda, senior vice president of business operations, says Thompson is not one to indulge in emotional decision-making. “Michael is a data analytical guy. That’s how business moves. Mike wants to chew on the data, and then come back and have another conversation… That’s awesome.”

From product development to waste management, Thompson has focused on tech innovation. “A lot of the innovation we focus on happens to be in the technology of our facilities,” he says. “There’s a lot of computer systems that run our equipment. Back 10 years ago, we didn’t have it. The business has become more science than art. You have more sophisticated equipment that will just do a better job.”

“A lot of our customers are looking [to us to identify] the new flavor or taste—[or to create] a product that’s going to really get customers excited. They depend on their supply base [like us] to come up with those ideas. Because we are in retail, we try to offer different innovative [taste options] to our customers so they can use them.”

And to meet the demands of today’s eco-focused world, Thompson must elevate his game when it comes to waste management. “A lot of customers want us to be a sustainable company,” Thompson explains. “They require it. Think about your own waste stream: How much of your garbage goes into landfills? Today, 75% of our waste is recycled. Our goal is to get to 100% of all of our waste being recycled.”

To make all this work, Thompson can’t stress enough why business relationships are so vital. “Even in the digital world, relationships are still key,” he says. “We shouldn’t give up on people knowing who we are. And how do people get to know you? You build relationships. Every person is special. I encourage any business owner, especially [those of us] on the diversity side, to build key relationships with customers and potential customers; it’s just so important.”

This practice led to remarkable milestones and breakthroughs. When Thompson first took over the business, Fair Oaks Farms had a four-day production schedule which he believed didn’t provide enough capacity to sustain the operation. But through his relationships, he picked up additional business and began to produce five to six days a week. “We got to a point where—for a while—we were producing seven days a week,” he maintains. “As the business started growing, we were like ‘Wow, this is working!’”

As revenues increased, the banks naturally gained more confidence in financing the company’s growth. By 2007, Fair Oaks Farms opened its second, 60,000-square foot production facility. The result hasn’t only been increased business but also been industrywide recognition. For example, the company has achieved a number of accolades over the past 15 years, including being named Export Supplier of the Year by The Department of Commerce, acknowledged for worker safety by both the American Meat Institute and the National Safety Council, and identified as McDonald’s Innovation Supplier of the Year.

Part of Thompson’s entrepreneurial vision has been creating a lasting black institution that he plans to pass on to his son, Michael J. Thompson Jr. The younger Thompson, who has worked at the company for roughly a decade and has been engaged in several departments, isn’t ready for his father to retire yet. “I want him to stay as long as possible. One of the best joys is taking things off his plate, so he can enjoy himself. Every day I go to work, I pay back a tiny percentage of what he’s given me. [It’s] a blessing.”

But don’t expect coach—oops, CEO—Thompson and his team to stop long to celebrate. He says the carrot is always just two or three feet out of his reach: “I live that way every day, and that works for me in a positive way. It keeps me active, energetic, and hungry. Every day. In my business, you have to be hungry. If you stop, you’re not going to reach your goals and objectives. If we hit a milestone, I’ll celebrate it but it’ll be for a very short time because we have to move on. The nature of this business—and the competition—is just so tough out there.”

Whether you score a win or a loss, Thompson believes the ultimate victory is staying in the game.