FAMU Grads Serve Up Social Responsibility with The Cravings Truck 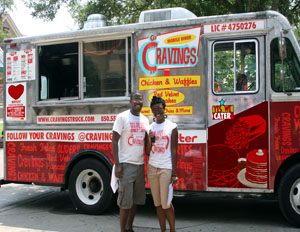 The Cravings Truck owners Johnathon Sellers and Kianta Key pose outside of their mobile restaurant in Tallahassee, Florida (Image: Source)

Like most recent graduates, Kianta Key, 25, and Johnathon Sellers, 28, were focused on their next steps. After watching a Travel Channel special on food trucks and taking a summer trip to Philadelphia, the Florida Agricultural and Mechanical University alums experienced an ‘aha’ moment: they would bring the mobile eatery trend to Tallahassee, Florida.

“We’re really like the first food truck to be started in Tallahassee,â€ said Sellers, a current Morehouse School of Religion master’s student.

The portable restaurant presence was scarce in Florida’s capital, so the couple turned business partners hit the ground running, even stopping into the offices of government agencies daily to ensure all their questions were answered. A few months of legal preparation, a used 1985 Chevy Step Van (named Lazarus) and a bevy of financial sources–from a student refund check and credit cards to family contributions and savings–later, The Cravings Truck opened in August 2010.

Specializing in chicken and red velvet waffles, The Cravings Truck gained traction not only through word of mouth but the clever use of highly-popular social media platforms Foursquare, Twitter and Facebook.Â  The journalism school graduates, already aware of the importance of this form of technology, monitored how other food trucks interacted with their customers and brought their own ideas to the table.

“Social media is not just numbers, there has to be some type of engagement there,â€ said Key, a current Florida State University master’s student. Â “I think that has been a reason why we’re so popular. We talk back to our [Twitter] followers and our Facebook fans.â€

Referring to their loyal customers as “cravers,â€ the culinary duo often looks to their clientele to submit new menu ideas or vote on the waffle of the week flavors, which in the past have included sweet potato, apple cobbler and red velvet with chocolate chips topped with bourbon burnt sugar ice cream.

The signature red velvet recipe was created by Key’s grandmother, Doris Rogers. “My grandmother was actually the inspiration for the truck,â€ the Atlanta-native said.Â  “For Christmas or Thanksgiving, she would have a bunch of orders and she would turn the desserts into breakfast for the morning so we’d be eating like pound cake pancakes while watching the Macy’s [Thanksgiving] Day Parade.â€

Key and Sellers plan to expand their menu selections and are looping in local grocers and farmers to help make that happen. They plan on offering healthy eating options, such as fresh fruit and organic popsicles.

Community uplift and growing partnerships is a focal point for the two entrepreneurs.Â  “It goes back to a communal work ethic to help everyone make it, and if you have resources not being stingy and share,â€ said Sellers.

They’ve collaborated on countless fundraisers with campus organizations, including Relay for Life, Iota Delta Chapter of Alpha Phi Alpha Fraternity, Inc., and Alpha Kappa Psi Professional Business Fraternity, among others. Also, the young partners have helped local organizations and startups with raising scholarship funds, as well as promotion and packaging for these businesses.