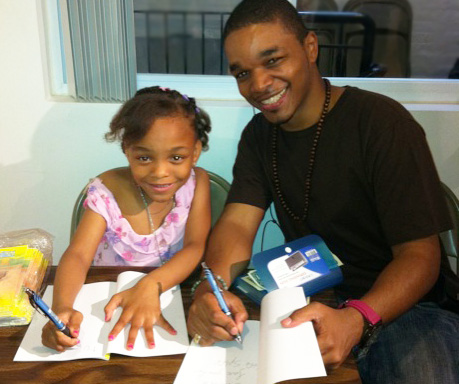 This Father’s Day is a special one for actor and entrepreneur Ephraim Benton. The Brooklyn, N.Y. native, who has appeared in TV shows and films ,including Emmy award-winning Law & Order and Oscar-winning blockbuster Precious, recently took a step into new territory with his latest venture, Daddy Daughter Publishing.

And his 7-year-old daughter, Amber, is his partner and co-founder.

The enterprising father of two, (his eldest daughter, Ziona, 11, is also a silent partner), took talent and turned it into family bonding and wealth building. “My inspiration began with Amber,” he says. “She came to me with stories she’d written in her composition notebook that were very unique and abstract. I asked her would she like people from all around the world to read her stories. She agreed, and we started the company.”

Amber, who counts Dr. Seuss’ The Cat in the Hat among her favorite reads, penned two books for the company’s launch, Nail & Hammer, a story of best friends, and Bill and His Adopted Sibling’s Cup, Blender & Blanket, an anti-bullying tale advocating self-confidence.

BlackEnterprise.com talked with Benton about the family’s self-starter spirit, the perks of being a young boss, and the importance of advocating for urban literacy across the nation.

Why was it important to start a venture with your daughters?

Amber is just like me: We’re both out-of-the box thinkers. I’m my own self-motivator and like to do my own thing, and at early age, she’s also like that. I thought, ‘If someone would’ve noticed it in me from the beginning, where would I have been?’Â  I thought this would be the best way to promote entrepreneurship, encourage her talents and inspire other families in urban areas to invest in their child.

A lot of parents like to let children be raised by technology, but that one-on-one bond is vital to a child’s growth. And as black fathers, we often get a bad rap, though there are so many more positive examples than those often negatively portrayed in the media, so reinforcing positive images of fathers in urban communities was important as well.

Ultimately, I’m doing this for my daughters. They will run this company one day. To have kids — even at the young age of 7 — who can say, ‘I have my own businesss’ — that’s powerful.

What is the day-to-day process of working with Amber?

We work as partners. The process is really her writing freely, and I help her edit. Sometimes I’ll change a few things around, to make sure the grammar and other things are correct and that the stories make sense and have a great message. We do it together, so, whenever I make edits, I’ll get her final approval. She writes the story lines, I go over and edit them, and sometimes I’ll write some stories, and get her approval on those also.

You’re also the CEO of a music management company as well as co-founder of two film festivals. What’re the biggest lessons you’ve learned, being an entrepreneur, that you hope to pass down?

I come from a middle class family of entrepreneurs. My grandmother ran two soul food restaurants, and my grandfather ran his own pool hall and owned buildings. I think that’s where my entrepreneurial spirit comes from.

I learned on my own that you just have to go out and do it. Don’t be afraid. You might fail, but in order to become successful, you have to fail. You have to be self-motivated and keep moving forward. There are a lot of procrastinators in the world who talk a good one, but don’t do. You must be brave and have courage to just do it.

Also, understand you’re a brand and everything you do or say or how your represent yourself is looked at under a microscope.

With any business, there’s profits and money management involved. What have you taught your daughters about handling their earnings and saving?

My daughters have their own personal bank accounts that they can’t touch until they’re 18. I always tell them that it’s important to save money in the bank toward college. I also let them know that whether it’s a penny or a quarter, everything has value, and you have to be responsible with money.

Where do you see Daddy Daughter publishing 10 years from now?

In 10 years, I see it as a major independent medium-size publisher. That’s my goal, because Amber will be 17 and she’ll be heading into college. I also want to have an established animation cartoon in the future with some of Amber and Ziona’s stories, or even a film with some of her characters.

I see it as something major–a multimedia company that fills a void. You don’t see young entrepreneurs– father and daughters– doing this everyday. And what we’re doing, we’re trying to inspire and build a whole new generation of young entrepreneurs, families, writers and people who just love to read.

What advice would you have for parents who are in business with their family/children?

I’m learning right now. I’m a self-motivated go-getter, and sometimes I’ll work, work, work, work, with no breaks. At a recent two-hour book signing, we sold about 50 books, and that’s a lot of autographing for a little kid. Sometimes she needed her breaks. Also, at the location, she could see kids having fun and she wants to do that, yet she’s taking care of business.

People forget that even though it’s a business, it’s still a child involved. As a parent, you have to be careful about overworking your children. It’s not good to force anything on children and overwhelm them. You have to find a balance and let children be children.