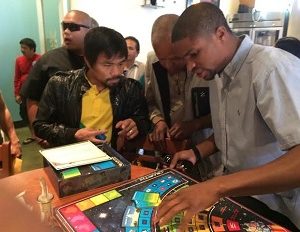 Earth Encounters is a trivia board game fueled by the concept that conversations among friends ignite big ideas, which not only impact our world, but make it a better place, as well. Earlier this year Taylor Walker, an MBA student at Loyola Marymount University in Los Angeles, launched a Kickstarter campaign to help raise $15,000, in order to mass produce the working prototype of the game.

Lawrence Walker, a former entrepreneur and manager at IBM and Xerox, first came up with the idea for the game in 1989, right before his son–who is now also his business partner–Taylor was born. Within a week of launching their crowdfunding campaign, the Walkers had surpassed the goal at $16,060. By the close of the campaign in April, nearly 300 backers pledged $19,544 to help bring the project to life.

Board Games Are Big Business

Taylor Walker, 25, has made Earth Encounters the focus of his graduate work in business at Loyola Marymount. He is applying what he learned in the classroom to a real-life situation. “Starting a business requires an understanding of business law, accounting, budget projections, and marketing,” he says.

He and his two younger brothers helped their dad with new game questions, to modernize it. “I know this means a lot to my father, so I’ve dedicated my MBA to trying to make this game come to fruition,” he says.

Not to mention, the gaming industry is one that is rapidly growing. The market for board games and puzzles grew 10% from 2013 to 2014, to $1.4 billion, according to the Toy Industry Association, which uses the NPD Group’s retail tracking data.

This Learning Experience Is Not a “Trivial Pursuit”

Earth Encounters quizzes players on subjects like history, religion, politics, and art and prompts debate on social issues. The premise for Earth Encounters is that an alien life form that feeds on human knowledge has landed on Earth. Players start at a time ship, which can travel to any place or moment in history, and move across the United States to find an intelligence-gobbling alien, hiding somewhere in the Eastern Time Zone. The player that defeats the alien to save the earth wins. To defeat the alien, players must use their intellect to answer questions and advance across the board. But, don’t call it “trivial pursuit.”

To help people learn and jog the memories of those who have forgotten that which they have learned before, Earth Encounters is designed for teens and adults. It’s not only fun to play, but it also sparks dialog among friends, brings value to the community, and perhaps, can even change our world for the better.

“Intellect and fun are not enemies,” Walker says.