Felicia Horowitz Hosts 'I Am Not Your Negro' Screening 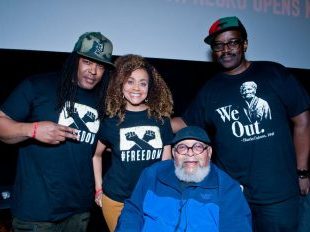 Over the past weekend, Felicia HorowitzÂ gathered up a group of influential artists, activists, philanthropists, students, community leaders, and tech community members to host a screening of the Raoul Peck directed film, I Am Not Your Negro, at the Landmark Theaters Embarcadero Center Cinema in San Francisco.

The audience was riddled with graphic images that have plagued the African American community, but more importantly, make up a large role of our defined history in the United States. It follows three key figures: Dr. Martin Luther King, Jr., Malcolm X, and Medgar Evers, interweaving them into a story told from the mastermind of James Baldwin.

Once the screening completed, the audience was met with a panel discussion that included, Rev. Cecil Williams of Glide Memorial Church; Shaka Senghor, the author of New York Times bestseller Writing My Wrongs; and legendary hip-hop historian, Fab 5 Freddy, who all graciously provided us with their feelings toward the piece.

“Raoul mentioned that he had been working on this film for over 10 years,” Fab 5 Freddy said. “I told him, it’s uncanny how perfect the timing was, because this film, for me, is almost like it’s brought James Baldwin back to life, at a very important time in our history. A lot of what you saw, he said over 40, 50 years ago–and it still rings very true now.”

Shaka Senghor had a very torn perspective. “Watching this film, I felt conflicted,” said Senghor. “On one hand, I understand how important it is to visit the painful memories of our past, to understand how we got to where we are. But, on the other hand, I feel like our pain and suffering has become America’s porn. I believe that, in this country, we ejaculate the idea that the only way to empathy and building bridges of connections and compassion to black America, is by seeing our worst moments play out over and over again, as reminders of the trauma that we experienced in our day-to-day lives.”

“Watching the film, I felt a deep-rooted conflict. But then, I thought about the power of acknowledging [it]; saying, ‘I am not yo nigga,’ I’m an empowered human being that contributes mightily to this country–the world. We are so much more than athletes, entertainers, and victims, so what I hope is that people walk away with a sense of purpose that’s not rooted in our pain, but rooted in love, because that’s what ultimately moves us forward. Pain is what keeps us trapped,” Senghor continued.

The overall hope for this film is to reignite the conversation. We have to work to change the narrative. “We are not your negro,” said Williams. “We define who we are, and we accept everyone for who they are. It’s been a long journey, as seen in the film, but hopefully, one that will cause us to unite and create fresh, empowering perspectives that generate new outcomes.”

I am Not Your Negro is currently in theaters, Nationwide.