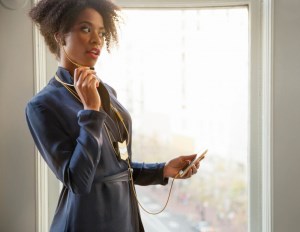 Tinsel Founder and CEO Aniyia L. Williams is transforming tech essentials into fashion accessories for women, starting with an audio necklace, with the full functionality of headphones integrated into it.

It all started from a familiar problem. “My headphones would get buried at the bottom of my purse, or I would spend minutes trying to untangle them when they weren’t broken,â€ Williams explains. “I was buying multiple headphones a year. I just thought, ‘Man–if I could wear my headphones like a necklace, without them looking like headphones, that would be awesome.”

Wearable tech is such an explosive and rapidly changing market that is still in its infancy, which makes it “really exciting to be part of,” Williams says. To Williams, this meant making something useful and beautiful. But, how could she house great sounding earbuds in a necklace like structure, to keep them both ready-to-use and inconspicuously fashionable? “Women are an afterthought, when it comes to consumer electronics. I wanted to change all of that,â€ Williams explains to Black Enterprise.

Around the time she started Tinsel in 2014, Williams had been heading up the marketing team at Voxer, maker of a walkie-talkie app, for over three years. Though unsure of how to turn her concept into a full-fledged product and without any previous experience building consumer electronics, she went to her then boss at the time, Voxer CEO Tom Katis. Not only did she get to pick his brain, she got the Silicon Valley tech player to invest in her new business. Through Katis, Williams was introduced to Ed Kilduff, an industrial engineer, who became an advisor.

In 2015, Tinsel launched an Indiegogo campaign for pre-orders of its first product, named “The Dipper,” to not only raise some extra money to cover production costs, but also prove to potential investors that Williams had truly found a market worth backing. Tinsel exceeded its goal–108% funded at $55,049 in total funds. Her team refined the product one more time before putting audio necklaces in theÂ hands of 300 backers.

Transitioning From Arts to Tech

Williams points to the fact that she has over a decade in the arts as a classically trained opera singer, in addition to having held roles in marketing, community management, business development, and non-profit fundraising.Â Today, she is fully immersed in the development and manufacturing of fashion-first hardware, as well as building the first fashion brand for consumer electronics.

Currently, the product is sold solely online at Tinsel.me. “We are now having conversations to see where we are going to expand, in terms of our retail presence. We have been experimenting with doing pop-up shops in major cities across the nation,â€ says Williams. “We are still learning how to merchandise it in a real-life environment.â€ Marketers are not quite sure if it is jewelry or electronics–well, it’s both.