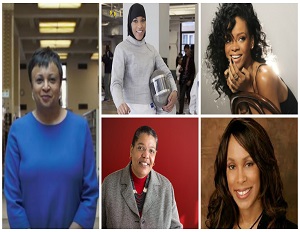 [Related: Then & Now: 10 Global Influencers of Color in Activism, Arts, Fashion and More]

From historic pop culture moments includingÂ BeyoncÃ©’s Super Bowl performance, Kendrick Lamar’s Grammy performance, and a mind blowing #MLKNow event put on by Ryan Coogler and the rest of the Blackout for Human Rights team, the generational connection between cultural icons and current leaders is one that will be talked about far beyond Black History Month.

But as we continue to celebrate the accomplishments of history makers both past and present, it’s important to note just how much of an impact black women have made and continue to make on American culture. Despite being just three months into the new year, below are five women, who in 2016 alone, have already etched their name into history books.

1. Carla Hayden: Serving as the current CEO of Enoch Pratt Free Library in Baltimore, President Obama recently nominated Hayden to be the 14th Librarian of Congress. In this position, the Roosevelt University and University of Chicago alum will not only be the first woman to head the Library of Congress but also the first African American.

2. Michelle Williams: Last month, Harvard University announced that Williams will become dean of its School of Public Health, making her the first black person to head a faculty at the university and the first female dean of the school. She will step into this position July 2016.

4. Ibtihaj Muhammad: After making history several years ago for becoming the first Muslim woman to compete for the U.S. in fencing, African American female saber fencer Ibtihaj Muhammad is breaking records again after qualifying for the summer 2016 Olympics where she will be the first U.S. Olympic athlete to compete in a hijab.

5. Rihanna: As her video for “Work” featuring Drake continues to be the talk of the Internet, Rihanna is making history behind the scenes as the song reached No. 1 on Billboard’s Hot 100 chart. It’s her 14th song to climb to the top, helping her to surpass pop icon’s Michael Jackson’s number of chart-topping Billboard hits. This year, the Barbados singer also became the first and only artist in RIAA Gold & Platinum history to be certified with 100 million song awards.