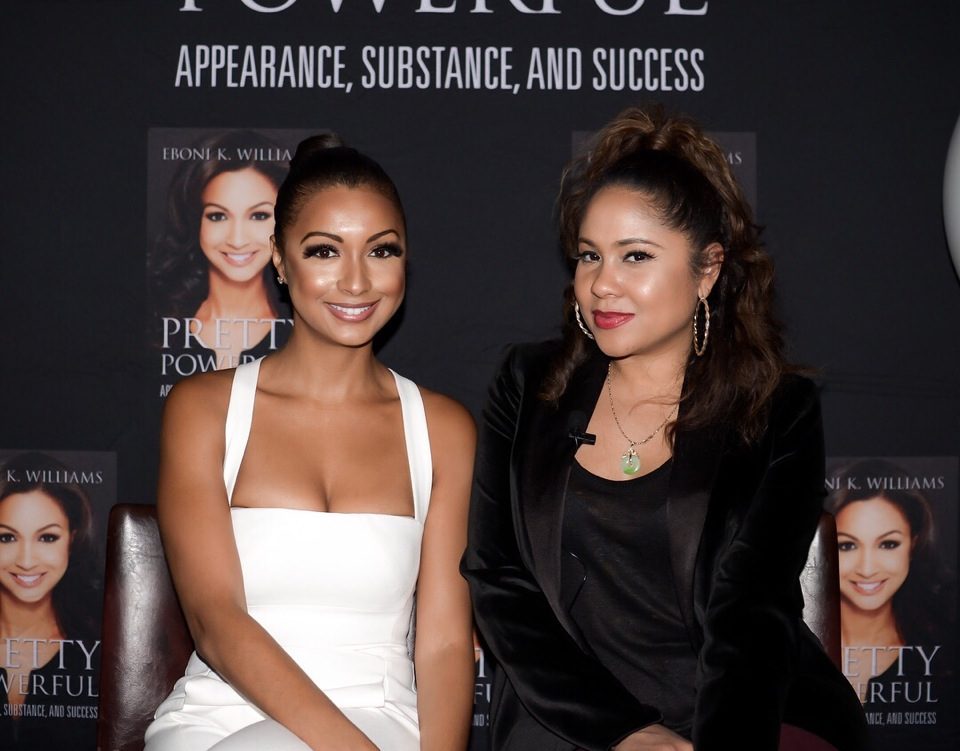 Women from all professions and industries came out to hear an intimate conversation in New York City between attorney and former co-host of The Fox News Specialists, Eboni K. Williams  and The Breakfast Club co-host Angela Yee,

The discussion focused on women embracing femininity as one of their biggest assets in achieving success and was based on Williams’s 2017 book Pretty Powerful: Appearance, Substance, and Success ($19.99; Viva Editions).

Williams, who described her book as her “love letter to women,” encouraged attendees to take advantage of both their beauty and brains to have a successful career. She also spoke of “the bimbo effect,” which, in her book, she describes as the stigma attractive women are less efficient. On the other hand, women are also criticized for being too serious-looking, such as prosecutor Marcia Clark, who was ridiculed in the media about her looks during the O.J. Simpson trial.

Here are some gems Williams and Yee shared with BLACK ENTERPRISE on finding confidence, using femininity as an asset, and dealing with insecurities.

BLACK ENTERPRISE: What is the balance between being pretty and being powerful?

Williams: Being pretty is a really global statement, there is no one [defintion of] pretty. That is the first thing I wanted to spell: being pretty is not looking like Halle Berry and Lupita, although they are gorgeous. I do realize I have a look that works to my aesthetic, but I use that privilege because it is a pretty privilege, that is a real thing. But to empower other women in particular to embrace their pretty, I have never met a woman that didn’t have something pretty about her and that’s the truth. Whether its eyes, legs, hair, something about her voice, her energy, the way her body language moves through the room.

I tell the anecdote about my edges, and it’s true. My mom was on me because my edges weren’t ‘laying down flat’ like she raised me. She took it as a personal attack on her child-rearing. I was like you know what, ‘I’m embracing the kink, that’s what we are going to do now. It is what it is.’ It’s not what society says, it’s where you feel your comfort is and that’s pretty powerful.

Yee: I think that being feminine is being powerful because we have so much power right now, let’s keep it real. Women, I think, have always been more powerful than men. There are so many things we are capable of. I think that there are so many things we do, as far as running companies, so much better than men do. I think that we are really good at being diplomatic. Guys feel like they can’t express their emotions sometimes because it makes them feel weak. I think for us that’s really powerful when we are able to express ourselves to be emotional, but also be rationale.

What are some of your own insecurities and how do you deal with them?

Yee: I know at certain angles I look crazy. I know that sometimes my weight will fluctuate around certain times of the month around five pounds — and five pounds on me is a lot. People will say things like ‘you’re pregnant, you’re glowing, you’re expecting,’ — and that is so rude. People don’t understand how rude that is. I know sometimes my hair isn’t really done, I wake up at four in the morning every day, I wear sweats, and people will be like why she is dressed like that, why she can’t do this. And it’s like dude, I can’t please everybody; and I think when you start thinking I have to dress up a certain way for other people, that’s when you’ll drive yourself crazy because someone is always going to have something to say. So I just try to make sure that I’m comfortable with where I am and who I am.

What is your advice to women who are afraid to express their femininity?

Williams: My advice to those women is simply this: However you interpret your womanhood, feel totally permissible to demonstrate it not for other people; that is for you. We, as women, are not here to apologize for other people’s insecurities or uncomfortably. We are here to make sure that we are comfortable in this space. That is something I just started just a few years ago, sad to say, making sure I asserted myself comfortably in spaces. It is sometimes my femininity, I’m a woman of the south, a woman from a particular background, I enjoy traditional feminine antics. I like heels, I like pink, and I like make-up. I like those traditional feminine things. I’m not going to turn that down for anybody else.

I’m also a badass, kick-ass lawyer, and I don’t play when it comes to my business. Those things are not in conflict, those things are in beautiful duality. My advice for women struggling with how to assert their femininity [is] lay the burden down. Assert your femininity as comfortably as you know how and let everybody else deal.