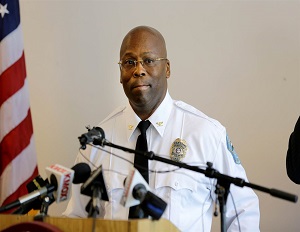 Anderson, who is the city’s first black chief, is a former amateur boxer, Army alum and 24-year veteran of the Glendale, Arizona police force. He will take a six month leave from his post in Arizona to assist the Ferguson community with restoring trust between the city’s predominantly black residents and the majority white Missouri police force.

“There’s a lot of work to be done,” Anderson told reporters Wednesday. “I’m ready to roll up my sleeves and get to work.”

Anderson, 50, is walking into a city that has experienced an explosion of racial tension after the August 2014 shooting death of 18-year-0ld Michael Brown at the hands of Ferguson police officer Darren Wilson. Since the incident, the Justice Department has released an investigation report that found a culture of racism within the Ferguson police department and municipal offices. Following Brown’s death and the release of the report, several city officials resigned from their position including Police Chief Tom Jackson.

Ferguson Mayor James Knowles III spoke about Anderson’s new position and why he believes he’s a great fit for the job.

Anderson, who grew up in Philadelphia, said Wednesday that he wants the community to work with him in building a better relationship between the community and the officers who are meant to protect them.