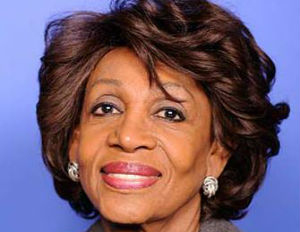 When you speak with California Congresswoman Maxine Waters about issues of economic empowerment for Blacks, hold onto something tight.Â  You will be caught up in a whirlwind of ideas, expertise, and passion.Â  Even the biggest skeptics of the possibility of income equality may begin to feel like the ground can shift and the gaps can close.

Still, the chasm is wide. Â According to a Federal Reserve survey on Consumer Finance, the typical American household has a net worth of $81,400, while Black household net worth is $11,000.

As part of her efforts to draw attention to the issue, Â Congresswoman Waters, the ranking member of the Financial Services Committee last month introduced the Wealth Gap Resolution, aimed at addressing the nation’s widening wealth disparities and what she calls their “crippling effectsâ€ on working class families and communities of color.

“We have known for quite some time that there are widespread generational and systemic factors that exacerbate the racial wealth gap,â€ the Congresswoman told BE.Â  We introduced this resolution to start the conversation in Congress about the Wealth Gap, so that we can work on solutions, she adds.

In addition to the Wealth Gap, Congresswoman Waters shared with BE her insights on wealth building, financial literacy, and fair credit reporting in the Black community.

BE:Â  Last month, you introduced the Wealth Gap Resolution. Talk for a moment about the consequences of this ongoing disparity?

What’s interesting about this discussion is that you hear a lot about the economy improving, but it’s only forÂ  the top 1%.Â  The middle-class is not participating.Â  Minorities and Blacks are not closing the Wealth Gap.Â  This plays out in wage disparities, high unemployment, a harder time with student loan debt, as well as limited education opportunities.Â  In addition, we lost a lot during the sub-prime crisis.Â  Much of our equity is in our homes.Â  I decided to tackle it and start the conversation so that everybody understands what is happening.Â  I’ve been working on this Gap for many years.Â  I started back when I was in the California Legislature.

BE:Â  The Wealth Gap Resolution concludes that the Wealth Gap is a by-product of public policy choices by lawmakers and makes clear the solutions involve legislative change. How are your efforts being received by Congress?

Finally, there’s more discussion about wage inequality.Â  It’s extremely important that we keep disseminating information. Â We have a lot of members of Congress who don’t know about this.Â  They don’t think about it because their constituents are doing okay.Â  They’re not thinking of Blacks.Â Â  It takes a lot of educating people and educating regulators. Â This discussion is extremely important.Â  I’d also like to point out the efforts of Congresswoman Carolyn Maloney from New York.Â  She is a ranking member of the Joint Economic Committee and has reproduced and circulated a lot of information about wealth inequality.Â  This is an extremely important discussion.

BE:Â  There is so much emphasis on wealth and income gaps that it’s rarely discussed that Blacks earning $75k are the fastest earning income group.Â  As society evolves, in terms of people of color becoming the majority, education levels improve, how do you see financial dynamics changing for Blacks? changing?

You have a small percentage of Blacks who fall into these categories…that are making progress. We want more people to be able to do it. Â We want more people to be able to qualify for home mortgages and think about investing.Â  African Americans have only a fraction of the retirement savings as Whites.Â  Many companies are eliminating benefit plans.Â  We have to encourage the use of 401 (k) plans and make sure that companies are paying their share of their worker’s retirement in addition to matching funds.Â  Once we get the discussion about the Wealth Gap really going, that’s something we can work on.

BE:Â  You speak a lot about the need for financial literacy with regard to Blacks and wealth building, particularly when it comes to real estate.

I just talked to someone whose grandparents left them a lot of land in an inner city.Â  It’s just sitting there.Â  They don’t know what to do with it.Â  They could take that land, talk to a developer and be a part owner by just putting up the land…They can negotiate to become an owner in that development.Â  I think that we have land that is sitting idle, particularly in the South.Â  It’s being taken and people are getting robbed.Â  This is a matter of financial literacy, particularly around real estate.Â  I still think that investing in property for African Americans is one of the better ways to gain wealth.Â  A joint venture is one of the safest ways.

BE:Â  As part of your effort to level the economic playing field, you introduced the Fair Credit Reporting Improvement Act of 2014 last Fall.Â  What are some of the things you would like to see done differently when it comes to credit reporting?

Once you are identified as having bad credit, it’s difficult to get a job, house, or credit card.Â  Think about the harm that could cause.Â  We need to fix the system by having credit bureaus erase ore eliminate some things.Â  The Act focuses on several areas:Â  It aims to shorten the time periods that most adverse information can stay on a person’s credit report by 3 years; give consumers better resources to verify accuracy; remove fully paid debt or settled debt from credit reports, including medical debt; remove delinquent information about private student loan debt once the borrower has made consecutive payments, and restrict the use of credit reports as a means to screen potential employees. We have people who are looking for jobs who may have fallen on hard times, who may have bad credit because they didn’t have a job.Â  Credit reports should be eliminated as criteria.