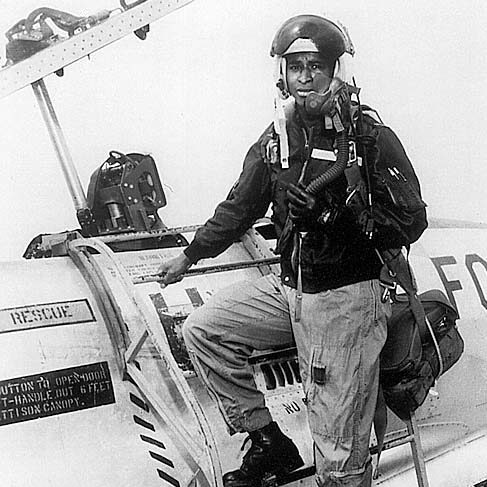 Air Force Maj. Robert Lawrence Jr., a trailblazer who opened a door for people of color in STEM, was honored on Dec. 8 for his contributions to space exploration at the Kennedy Space Center in Florida, the Los Angeles Times reported. Hundreds of people gathered at the center to commemorate him, including NASA dignitaries, astronauts, Omega Psi Phi fraternity members, and schoolchildren.

After graduating high school at the age of 16, Lawrence earned a Bachelor of Science degree in chemistry from Bradley University at just 20 years old. Later, he obtained a doctoral degree in physical chemistry in 1965. In the ’60s, he was part of a classified military space program created to spy on the Soviet Union. Had he not died in a plane crash on Dec. 8, 1967, at the age of 32, he would have certainly gone on to fly NASA shuttles to space. However, his life was cut short when his F-104 Starfighter crashed at Edwards Air Force Base in California.

“He had a great future ahead of him if he had not been lost 50 years ago today,” said Robert Crippen, who participated in the military space program with Lawrence, according to ABC News.

According to the Los Angeles Times, Lawrence’s family members have been fighting to get Lawrence the recognition that he deserves for decades. The Air Force would not immediately acknowledge that he was an astronaut since he did not have the opportunity to fly as high as the 1960s-required altitude of 50 miles. It also took 30 years after his death before his name was added to the Astronauts Memorial Foundation’s Space Mirror.