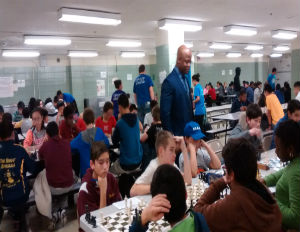 Maurice Ashley observes competitors at a Chess in the Schools tournament.

The door to the cafeteria opened, and a little girl stepped into the hallway.

“I won!â€ she squealed, and was immediately scooped up into the arms of a woman I assume was her mother, as she, too, shrieked with delight.

I witnessed this little girl’s triumph at the Chess in the Schools tournament on Saturday, at the Discovery School in Bay Ridge, Brooklyn. Although not all the students won their games–and I saw more than one instructor reminding kids that once they touch a piece, it’s considered a move–it was an exciting, competitive time.

A big part of the excitement was the presence of Maurice Ashley, a JamaicanÂ native who grew up in Brooklyn to become the first blackÂ International Grandmaster. (“The title ‘Grandmaster’ is awarded toÂ chessÂ players by the world chessÂ organization FIDE. Apart from World Champion, Grandmaster is the highest title aÂ chessÂ player can attain, and is held for life.â€)

Ashley recently joined the board of Chess in the Schools, a New York-based nonprofit. I spoke with him to learn more.

When did you start playing chess?

I started in high school, [but I’ve played] chess is my entire life. It’s helped me to maneuver through the challenges of being a Brooklyn kid. I’ve traveled all over the world and played against the best players. Now, I do commentary at all the top matches.

I get to teach young people here in Brooklyn. So, it’s a weird dichotomy–I play with the best, but I’m teaching little ones as well.

I’ve been making a living from chess. I didn’t know I’d be able to do that until I was in college, when I learned I could get a job teaching it. I had a team in Harlem that won the national championship in 1991, and we got to meet the mayor at the time, David Dinkins.

How did you become a Grandmaster?

You have to play other, international players and be very dedicated to the game. It takes thousands of hours playing, studying, practicing, devising ideas to spring on your opponents, reading books, and studying online–studying the best games.

Chess is a young person’s sport. All the top players become Grandmasters at 13 or 14 now. It’s astonishing.

Even in this digital age, chess still captures the imagination of a new generation–which just shows the enduring fascination of the game.

For more information about Chess in the Schools, visit its website.