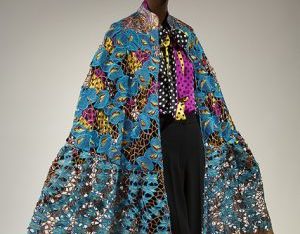 Tracy Reese. Olivier Rousteing. Aisha Ayensu–what do they have in common? Besides being successful black designers, they will soon share in the shine at the Museum at FIT at New York’s Fashion Institute of Technology. The museum is spotlighting several generations of African and African American fashion designers from the 1950s to the present in a new exhibit called “Black Fashion Designers,â€ which opens on Dec. 6.

The exhibit will feature 75 designs from more than 60 designers.Â They represent the transition from 19th-century dressmaking traditions that encompassed countless, unnamed black dressmakers, to the modern conception of a fashion designer. It is organized according to categories and themes, including eveningwear, menswear, street style, experimental fashion, and African influences.

The black experience is prominent in the work of many designers featured in the exhibition. For instance, Paris-based Patrick Kelly drew inspiration from his American Southern roots. The colorful buttons on his knit dress reference the mismatched buttons his grandmother used to mend his family’s clothing, noted a description on the museum’s website. Aisha Ayensu spins traditional Ghanaian wax-print textiles into ready-to-wear pieces. Duro Olowu, a Nigerian-Jamaican, London-based designer draws on multiple cultural perspectives and emphasizes Africa’s historic role in cultural production and international trade.

A section of the exhibition devoted to black designers breaking intoÂ the industry features work by New York-based Zelda Wynn Valdes, whose sultry designs were worn by Josephine Baker, Ella Fitzgerald, and Gladys Knight; and Ann Lowe, an unknown designer at the time who owned her own dress shop on Lexington Avenue and created custom-made gowns for society clients, including Jacqueline Kennedy’s wedding gown. She became one of the first leading black fashion designers.

Though it is a celebration of designers whose heritage influences their inspiration and creations, and who have made a cultural impact on the fashion world, the museum also noted that the exhibit aims to highlight the fact that many black designers have too often been unrecognized and underrepresented. It aims to bring awareness to the challenges faced by black designers and showcase how their experiences have changed over time.

“Although there have been exhibitions on individual black designers, this is the first major exhibition in many years that highlights the global history of black fashion designers from the 1950s to the present,” stated the curators on the museum’s website.

Black fashion designers began to gain recognition during the late 1940s, even while still segregated within the fashion industry, notes the museum’s website, adding that even today, they make up only about 1% of the designers covered by VogueRunway.com, the go-to online site for viewing collections from fashion weeks around the world.

Another section of the exhibition devoted to activism showcases fashions that send political and social messages. There’s also a tribute to black models and Ebony Fashion Fair, which gave them a national platform,Â as well as a short film in which formerÂ VogueÂ editor AndrÃ© Leon Talley interviews designers Tracy Reese and Mimi Plange.

The exhibit runs through May 16, 2017. For those interested in learning more, The Museum at FIT will host a one-day symposium on Feb. 6, 2017, featuring talks by designers, models, journalists, and scholars on African diaspora culture and fashion.