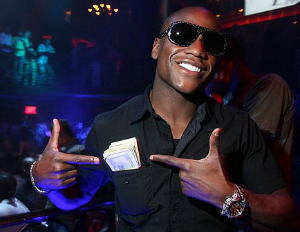 Money Team: Floyd Mayweather Jr. has signed a deal with Showtime/CBS which will keep his empire at the top for years to come.

Floyd Mayweather Jr. has signed a multi-year with Showtime/CBS, it was announced Tuesday. Terms of the deal were not released, but the news ends his 16-year relationship with HBO PPV and almost immediately changes the landscape of how the business is done in boxing.

On May 4, Mayweather will fight top-contender Robert Guerrero at the MGM Grand in Las Vegas, Nevada. The event is being dubbed Cinco de Mayweather.

“Floyd has signed a record-breaking deal with Showtime PPV/CBS and Floyd is ecstatic,” longtime Mayweather adviser told ESPN.com’s Dan Rafael. “This historic deal reflects a global superstar who is head and shoulders above his peers. HBO, they made a great offer but the Showtime PPV/CBS offer was substantially greater in every facet, from top to bottom.”

For more on the deal read the report at Y! Sports.