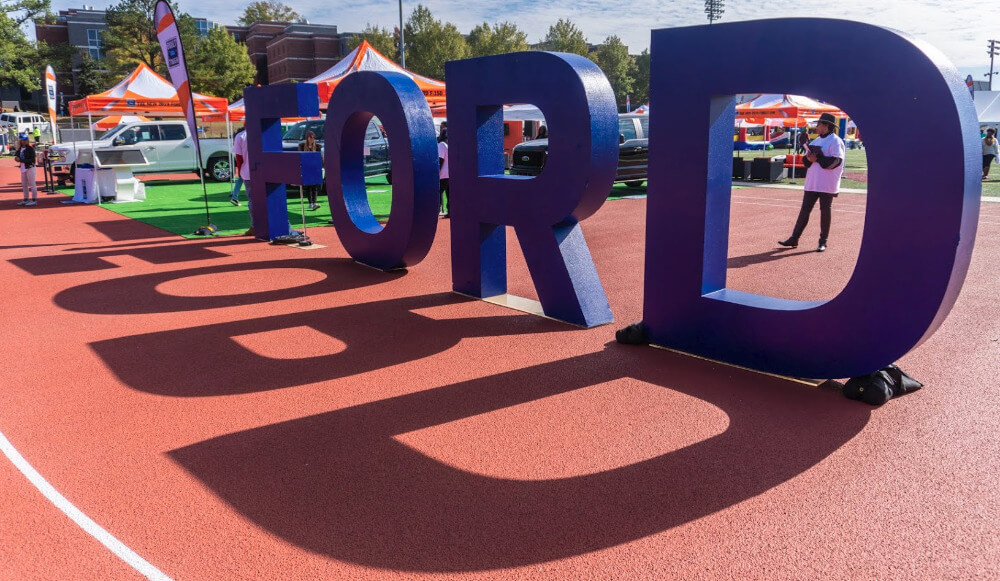 When it comes to contributing to the education of students attending historically black colleges and universities, some companies just make a donation, which is cool, but, for the likes of Ford Motor Company, they are actually involved in doing more than just giving money.

I had the opportunity to actually see and experience what goes on when a corporate company commits to an HBCU. The tour made stops at Liberty Bowl Memorial Stadium, Memphis, Tennessee, for the Southern Heritage Classic, the annual rivalry between Jackson State University and Tennessee State University; Panther Stadium at Blackshear Field, Prairie View, Texas, for the Prairie View A&M University Homecoming, where the Panthers took on the Dragons of Virginia University of Lynchburg; and the final stop at O’Kelly-Riddick Stadium, Durham, North Carolina, for the North Carolina Central University Homecoming, where the Eagles went up against the Spartans of Norfolk State University.

I attended the homecoming for North Carolina Central University, where southern hospitality was definitely in full effect. I witnessed and even participated in ‘car karaoke’ but done in a Ford F-150 and there were numerous interactive games people enjoyed and giveaways including Ford ultimate tailgate prize package where someone received a Ford-branded package complete with two padded lounge chairs, two tumblers, and a 45-quart cooler.

For nearly 15 years, Ford has donated more than $2 million to support the Tom Joyner Foundation and continues to do so. “Through its support of the Tom Joyner Foundation, the Ford Motor Company has changed the lives of countless families,” says Tom Joyner. “The scholarship dollars provided by Ford have helped students graduate from HBCUs, relieving them and their families of financial burden and allowing them to pursue careers, especially in the STEAM fields.” For every ride & drive at the homecoming game, Ford donated $20 to the Tom Joyner Foundation.

We attended a brunch where NCCU’s Tymia Atkinson (a junior Social Work major who plans on attending law school to specialize in sexual and domestic violence law after graduating) received Ford’s 2019 Community Service Leader Award and we viewed an “Ode to the Builders” commercial spot, filmed at the Ford River Rouge plant, that was narrated by Angela Bassett. The brunch was hosted by 97.5 radio personality SHOWTIME.

I got the opportunity to speak to Dibrie Guerrero, who is the multicultural marketing manager for Ford Motor Co.

Why is investing in HBCUs an important initiative for Ford Motor Co.?

“Ford Motor Co. touches the lives of people everywhere; globally we are known for making and selling the most technologically advanced, reliable and fun-to-drive vehicles in the world, but we are also dedicated to driving human progress not only through the freedom of movement but within our communities. Education is the foundation for success. It is key to making lives better, creating social change and building strong communities and HBCU’s provide an environment that prepares future generations toward contributing to their communities, builds confidence and gives them the skills they need to cultivate a career. At Ford, we are all about working toward the future together.”

Is there anything you’d like to add about the partnership between the HBCUs and Ford?

“Driven by the F-150 HBCU Truck Tour, our partnership with HBCUs is deep and longstanding. Providing our platform to further educate the world on the importance of HBCUs and the importance of building a strong foundation for a strong future is what continues to drive that passion within us. We believe in leadership and pride and we couldn’t be any prouder than always supporting HBCUs, it’s what makes us Built Ford Proud.”

Read more about the great work being done at HBCUs.