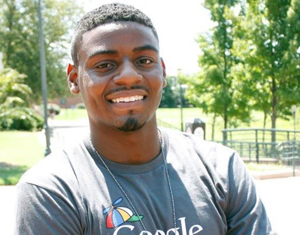 Beyond making an impact at Google, the world’s largest information superpower, Fabian Elliott, with less than four years of technology industry experience under his belt, is on a mission to transform Chicago into a Global Black Tech Mecca.

“With hard work and a bit of luck, I became the first person from my university to intern at Google, and that led to a full-time offer to start my career in the Chicago office,â€ said Elliott. “This exposure to the tech world lit my passion for black empowerment through technology and led me to play a key role in revamping, revitalizing, and re-branding Google’s black employee group. I now serve as Global Co-Chair, along with my core role as an advertising technology consultant.”

My latest endeavor with Black Tech Mecca is an effort to transfer what I was able to create within a company to the city I have come to love, by leading the charge to transform Chicago into the Global Black Tech Mecca.â€

“Our vision is to transform the city Â through the development of a thriving black tech ecosystem. We believe this will require programming synergy, an adequate impact tracking mechanism, and a comprehensive narrative. Thus, we will tackle it from a holistic scope by implementing a “connect and direct” strategy, defining a universal metric system, and executing a supportive branding initiative.”Â As an advertising technology consultant at Google, Elliott helps clients leverage Google’s digital advertising platforms to meet their business needs.

BlackEnterprise.com caught up with the young trailblazer to talk about his plans for revamping the tech scene in Chicago, and get his tips for aspiring change-makers looking to make an impact.

BlackEnterprise.com:Â Why is the Black Tech Mecca initiative needed in Chicago?
Elliott: The city’s Master Tech Plan envisions Chicago as a city fueled by technology, which requires increased participation of Chicagoans in the digital economy. The black community is drastically underrepresented in the tech space and are facing critical issues with unemployment, poverty, and access to resources. As a matter of fact, 34% of blacks in Chicago currently live under the poverty line. Thus, an initiative that can leverage tech to empower the black community and increase participation in the digital economy is essential.

Tell us about the ‘a-ha’ moment that inspired you to launch Black Tech Mecca?
I was at a community tech event last year. To be exact, it was the first annual fundraising event for Blue1647, a tech innovation center in the city. During a conversation with other attendees, I was sharing with them my interest in finding a way to make Chicago a beacon in the black, tech, and global communities. Then in mid-sentence, the idea to combine all of them and transform the city into the ‘Global Black Tech Mecca’ dawned on me. From there, I was obsessed with the concept and it’s possibilities for impact.

Black Tech Mecca is solely focused on the city of Chicago. Are there any plans to expand beyond the city?
Our long-term vision is that developing the world’s best black tech ecosystem in Chicago will eventually produce a blueprint for communities and cities around the world to follow. Working in tech, it is ingrained in us to always think about how to scale and maximize impact. However, one must first have something that is truly viable before scaling can even become an option.