Four Behaviors That Could Destroy Your Finances 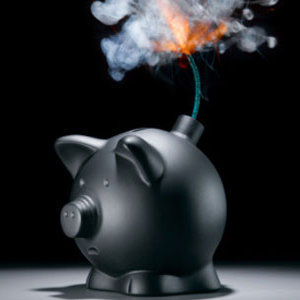 Dysfunctional spending habits could eventually blow up in your face Dysfunctional spending habits could eventually blow up in your face.

Each one of us has a certain “money personalityâ€ that drives our financial behavior. And sometimes, a certain personality can cause us to form an unhealthy relationship with money. In the book, Spent: Break the Buying Obsession and Discover Your True Worth ($14.95; Hazelden Publishing), Sally Palaian, a licensed clinical psychologist specializing in addictive behaviors and an expert on financial disorders, analyzes destructive money personalities. Here are four dysfunctional money behaviors.

Overindulgence. The first money personality described in the book is the indulger. Indulgers demonstrate their money problems through overspending. Subcategories of indulgent behavior include compulsive shoppers, compulsive spenders, and compulsive debtors. This type of behavior could easily put you in the poor house if not corrected.

Deprivation. Deprivers go to extreme efforts to spend as little as possible.Â Deprivers who obsess over their finances tend to hoard money. Palaian describes them as having a pathological fear of spending and letting go of money to the point where they put relationships, financial well-being, health, and even their own safety at stake. For example, the author speaks about someone who refuses to spend money on new insulation for his home. Consequently, the insulation becomes moldy and causes the homeowner to become exposed to a major health risk. The goal of the depriver is to save money at all costs–even if it means getting sick. In the long run, deprivers end up wasting money by not addressing necessities in a timely manner.

Obsession. Obsessors dedicate an excessive about of time to thinking about money and financial matters. They tend to gain satisfaction from acquiring things and often can’t control themselves with money.

Avoidance. Avoiders tend not to value money or think about it. They are fearful of wealth and view money as dirty or wrong. Those who avoid financial matters likely don’t know their monthly expenses and might rely on others to lend them money for basic necessities.

In partÂ two of this post, we’ll discuss the signs and how to recover from a financial disorder.

To find out the 7 deadly sins of money management, click here.