Throw a Fourth of July Party Like a Black Southern Belle

Are you still trying to figure out your holiday weekend plans? Plan a Fourth of July party to remember by throwing the doors open and hosting a big night out at home.

“Black Southern Belle kind of fell into my lap,â€ Perry says. “I was planning my wedding and decorating my home, and I was trying to get lifestyle inspiration that was uniquely Southern and uniquely black at the same time. But I was having the most difficult time finding it.â€

Over the course of one year, Perry, a former political event planner and relationship manager for Google in Washington, D.C., moved back home to Charleston, South Carolina; got married; bought a historic home; and started the site.

Here she shares her tips for this holiday weekend and other summer entertaining at home:

Take the Fourth of July party outside

“I live in South Carolina, and it’s all about having a big front porch. We really wanted to show outdoor entertaining in an informal way but still very stylish,â€ Perry says. That kind of effortless entertaining is a recurring theme. “One thing that I really want to hone in on [with] Black Southern Belle, is that not everything has to happen at a restaurant or at a formal event. You can still entertain in a relaxed way.â€

Simple can be chic

“You don’t have to have a 10-course meal just to have people over,â€ Perry says. In fact, one of her most memorable party setups was a biscuit bar, which simplifies things for host and guest alike: “You don’t have to rent all the table settings, which can be a hassle if you’re not a day-by-day hostess. But also, it’s an easy thing for people to pick up and eat and walk around with. It’s a mingling sort of food.â€

Be an authentic host

Entertaining colleagues and clients at home provides “a chance for them to see that who you are professionally matches up with who you are personally, that your values match up at home and at work,â€ Perry says. But make sure you’re working the room, making connections, and that the people you’re bringing together will have things in common; not just professionally, but also socially.

Good manners are always in style

“Go that extra mile and write a thank you card. Even though you’re the one that hosted, it’s nice to write a thank you card for people who took the time to come to your home,â€ Perry says. And make it easy on yourself by getting it done before your Fourth of July party. “After the event, you’re so tired. Write it beforehand and just put it in a little favor or a gift bag.â€

It’s all about a big front porch…. 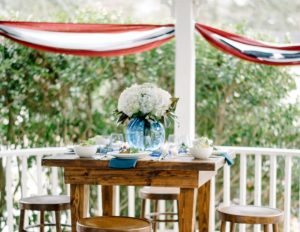