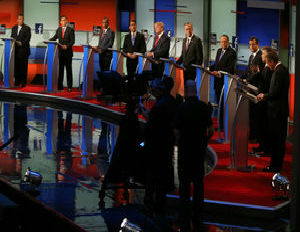 With Donald Trump officially bowing out of tonight’s debate, GOP insiders are hoping the candidates will finally get a chance to highlight their policy strengths — and perhaps Trump’s weaknesses.

Here’s the lineup, ranked in the order they placed in the qualifying polls:

Tonight will mark Rand Paul’s return to primetime, as he did not poll high enough to secure a spot on the main stage at the last GOP debate. Paul, citing his frustration with the RNC-sanctioned qualification requirements, refused to attend the Charleston debate. Paul has said he is “very excited” to participate in tonight’s debate.

BE Politics will be live-tweeting the primetime debate, airing on Thursday at 9 p.m. on Fox News. Follow us at @BlackEnterprise and join the conversation by using the hashtag #BEpolitics. We can’t wait to hear from you!