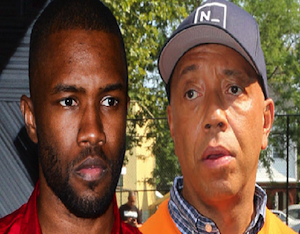 Image: In Flex We Trust

As the music world still awaits new music from the celebrated singer known as Frank Ocean, his father, Calvin Cooksey, has just slapped his son’s boss Russell Simmons with a hefty lawsuit.

According to SPIN Magazine, Ocean’s father — who hasn’t been a part of his life since he was 5 — is suing Russell Simmons for $142 because he feels he was inappropriately labeled as a ‘deadbeat dad’ on Simmons’ Global Grind website.

Cooksey, in his lawsuit, claims that he wasn’t allowed to be a father to Frank because his “money-grubbing mother” moved from Long Beach, California, and hid the boy from him. Frank’s father says that Simmons allowed lies to be published about him without checking for any facts, including not using his actual name in the posts.

Described in the lawsuit as a singer, writer and inventor, Calvin Cooksey is suing for loss of future income and believes that the $142 million should rightly cover it. Russell Simmons, Global Grind and, of course, Frank Ocean all have yet to release a statement.