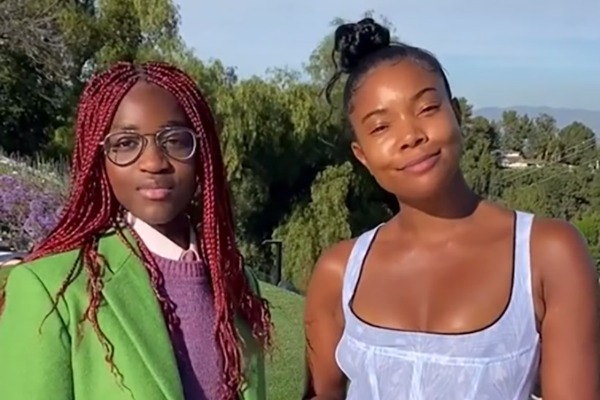 Gabrielle Union and stepdaughter Zaya Wade have come together to inspire their social media followers to remove “toxic beauty advice” from their timelines.

In partnership with Dove, Union and Zaya posted a short video clip explaining their part in promoting self-love to the masses.

Union and Zaya stood side-by-side in solidarity to shoot the short motivational clip that encourages social media users to “mute” or simply “unfollow” anyone or anything that makes them question their appearance.

“We’ve all seen toxic beauty advice on social media and we think it’s time we ended it,” the duo said.

“If a post tells you, you’re not pretty enough, unfollow. If someone says natural hair is ugly, mute. If you see anything that makes you feel like you’re not beautiful, simply remove it from your feed.”

“I won’t follow anyone into thinking I’m not beautiful,” Zaya noted. “We don’t want you to either.”

The message was part of the Wade’s involvement in the Dove Self-Esteem Project that encourages parents to talk to their teenagers about recognizing and avoiding toxic beauty advice on social media, Blavity reported.

“The Dove Self-Esteem Project, along with influential voices like Gabrielle Union and Zaya Wade, have joined forces to launch #DetoxYourFeed–a NEW campaign aiming to expose toxic beauty advice on social media, while empowering teens to define their own beauty standards, choose their own influences, and encourage them to unfollow anything that doesn’t make them feel good about themselves,” Dove said in a statement.

Gabrielle and Zaya’s video message comes a few weeks after the family faced criticism for allowing Zaya to post a photo kissing her boyfriend at the family’s Easter celebration. Many have voiced their strong opinions about Dwyane Wade allowing Zaya to transition at a young age.