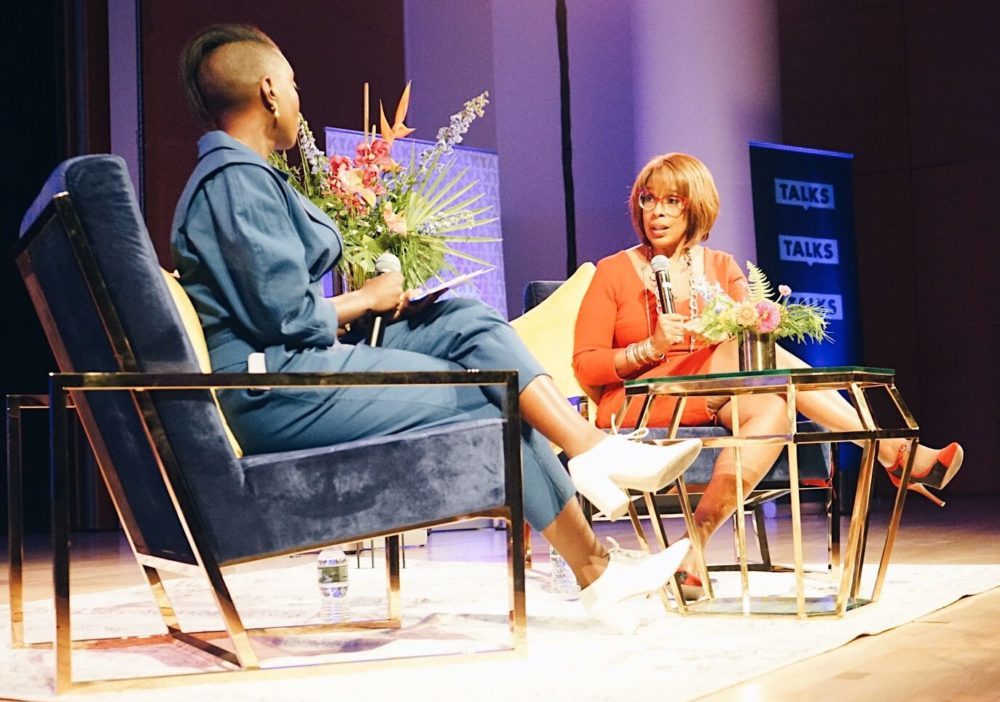 Last week, over 300 professionals and entrepreneurs of color gathered in Brooklyn, New York, for the inaugural Jopwell Talks conference, hosted by Jopwell, the leading career advancement platform for black, Latinx, and Native American students and professionals.

Described as “a celebration of people of color in the workplace,” the one-day summit was held at the Brooklyn Museum and headlined by CBS This Morning’s Gayle King, who had a candid, off-the-record conversation with GQ Deputy Fashion Director Nikki Ogunnaike. Other speakers included Dr. Michael Lomax, president and CEO of the United Negro College Fund; Marcus Samuelsson, award-winning chef and restaurateur; Antonio Lucio, global chief marketing officer at Facebook; and Edith Cooper, independent board advisor at Etsy and Slack.

The focus of Jopwell Talks was the experience of being a person of color in the workplace. Through a series of intimate fireside chats, the summit also explored thought-provoking ideas that redefined how professionals of color can leverage diversity as an asset in their career.

Following his fireside chat, Dr. Lomax said it was “an honor” to share his knowledge and make an intergenerational connection with a room filled with young professionals of color.

“I get kind of energized off of this,” he told BLACK ENTERPRISE. It’s an opportunity for me “to give a pep talk to young people who are beginning the journey.”

Through a combination of storytelling and candid advice, Dr. Lomax relayed a message of motivation and resilience during his session. “You can prevail, you can succeed, you can win, but there’s a lot of struggle involved,” he said. “I want them to be strong. I want them to fight back. Like I said, they have to have a sledgehammer in that tool kit, not just a smile.”

In a time when many millennials are busy connecting on social media, Ryan Williams, 30, the co-founder and president of Jopwell, says it’s important to make space for like-minded folks to network in real life. “Being a company in the human capital space, we firmly believe there’s no replacement for the human connection that happens [when people come] together in person,” said Williams. “We have a role or responsibility and opportunity to bring people together to convene, to add value in that way that’s distinct from what we can do online.”

He added that the goal of the summit was to leave the audience feeling inspired and energized. I want them to walk out of here “feeling like they are at a high level inspired to succeed professionally to find fulfillment,” he told BE, adding, “and feel like they can like navigate the workplace more tactically.”

In addition to pouring into the crowd, Porter Braswell, 31, the co-founder and CEO of Jopwell, says he, too, walked away feeling full. “I think the biggest thing that stuck out to me thus far is that the path to success is nonlinear.” He added, “the speakers that we’ve heard from today, they experienced challenges and obstacles. But in those challenges and obstacles is where they found opportunity. And so just remembering that no matter what season you’re a part of, there’s opportunity there.”

Back in September 2017, Jopwell raised $7.5 million a Series A round, bringing the company’s total funding to date to $11.75 million. The round was led by pre-existing investor Cue Ball Capital, along with Kapor Capital, Y Combinator, Omidyar Network, Valar Ventures, SJF Ventures, Blue Ivy Ventures, and Teneo Ventures.