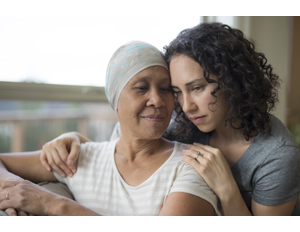 Ethnic young adult female hugging her mother who has cancer

Genetically using a person’s own immune cells to target cancer appears to virtually kill multiple myeloma, a blood cancer being diagnosed more frequently, according to an early trial from China.

The therapy, called CAR T-cell therapy, caused 33 of 35 patients with recurring multiple myeloma to enter full remission or have a significant reduction in their disease within two months.

In a second study, developed by the National Cancer Institute, nearly two dozen patients responded well to the treatment.

Experts at an American Society of Clinical Oncology conference in Chicago, where the results were announced last week, say though both studies were small, this is a first for multiple myeloma.

The results are “impressive,” said Len Lichtenfeld, M.D., deputy chief medical officer of the American Cancer Society. “These are patients who have had prior treatment and had their disease return, and 100 percent of the patients are reported to have had some form of meaningful response to these cells that were administered.”

For the new therapy, custom-designed for each patient, doctors collect the patient’s T-cells—one of the immune system’s main cell types—and genetically reprogram them to attack abnormal multiple myeloma cells.

The process is like a GPS, said lead researcher Wanhong Zhao, M.D., associate director of hematology at the Second Affiliated Hospital of Xi’an Jiaotong University in Xi’an, China. Immune cells are steered to cancer cells, making them assassins that never miss their target.

“The theory is [altered T-cells] should attack the tumor and continue to grow to become a long-term monitoring and treatment system,” Dr. Lichtenfeld said.

The technology represents the next step forward in immunotherapy for cancer, said Michael Sabel, M.D., chief of surgical oncology at the University of Michigan. “Immunotherapy is now really providing hope to a lot of patients with cancers that were not really responding to our standard chemotherapies.”

Historically, such therapies tend to be very expensive, Dr. Lichtenfeld said, and experts don’t see CAR-T breaking that cycle, should it receive approval. But it’s still early and much more research will be needed before that step.

The Chinese research team plans to continue the study with 100 patients at four hospitals in China. And a similar clinical trial will take place in the U.S. by 2018.

Multiple myeloma affects plasma cells, which make antibodies to fight infection. More than 30,000 cases occur each year in this country, with more than 115,000 worldwide. It’s the second-fastest growing cancer for men and the third for women, rising 2 percent to 3 percent per year, according to the NCI. Between 60,000 and 70,000 Americans have the blood cancer now, and only about 50 percent of them live five years after diagnosis.

This piece originally appeared on BlackHealthMatters.com.