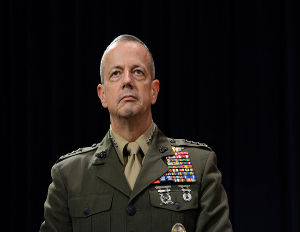 Gen. John Allen, the top American and NATO commander in Afghanistan, is under investigation, according to the N. Y. Times, for what has been called “inappropriate communicationâ€ with Jill Kelley, a woman in Tampa, Florida whose friendship with recently resigned CIA Director David Petraeus has been at the center of an FBI probe.

Petraeus’ biographer and mistress, Paula Broadwell, sent Mrs. Kelley harassing emails anonymously because she felt threatened by Mrs. Kelley’s and Gen. Petraeus’ relationship. One such email told Kelley to “stopÂ socializing with generals” in the Tampa area.Â Frightened by the emails, Mrs. Kelley took them to the FBI whose investigation uncovered Petraeus’ affair and now a possible “inappropriate” relationship between Jill Kelley and Gen. John Allen. Â Allen has denied any wrong-doing.

Mrs. Kelley is married to a surgeon in Tampa and works as an unpaid social liaison at McDill Air Force Base.