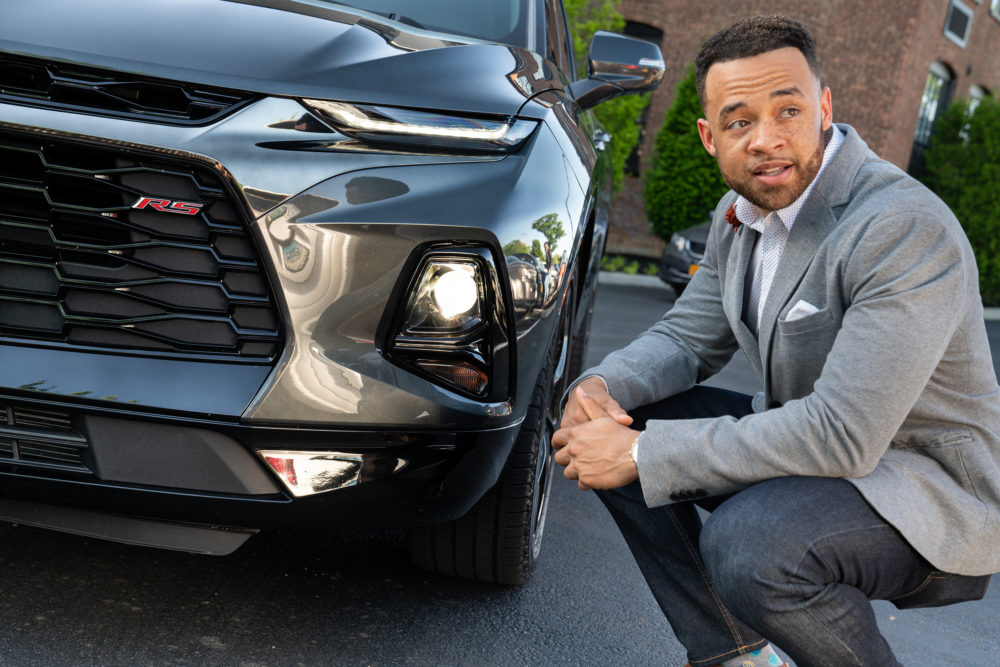 What do you think of when you think of who typically drives a Chevy Blazer; a white dude—maybe in the Midwest or South? Someone who lives for off-roading their vehicle through dirt trails? Well, the Chevy Blazer has gotten a reboot in 2019. General Motors is targeting its new lineup of crossover Blazers to a younger, more diverse consumer market. And helping to lead that effort is someone who fits that demographic: Charles Muse—a 28-year-old aerodynamics engineer at General Motors.

“I’ve been a car guy since I was little,” says the Ohio State University grad who hails from Chicago. “I helped my dad restore his vehicle. I tore apart my car, broke it, fixed it, and broke it again,” says Muse.

He’s not just a ‘car guy’ though. Muse received both academic and sports scholarships to attend Ohio State where he played basketball. He also participated in a number of technical programs before attending college which he says fostered his love for aircrafts and flying. He ended up studying aerospace engineering.

It was at a career fair that Muse was introduced to the idea of working with General Motors. “I always thought ‘Oh, I’m an aerospace engineer major, I’ll go to Boeing, I’m going to go to Lockheed Martin – I’m going to work on aircrafts,” he recollects.

“And then I went to a career fair at General Motors and they said, ‘No, we have aerodynamicists. We work a lot with stringent fuel economy requirements that are coming out. We have a need for aero performance engineers.’”

A New Era in Crossover Vehicles

Muse spoke about his passion for the new Chevy Blazer and what it took to make the car come to life. His enthusiasm as he shows the vehicle and talks about what his role was in creating it is palpable.

“Overall, you can tell this vehicle has a very striking stance,” says Muse. “And that’s because when it was framed up we knew that we wanted to penetrate the crossover market and we wanted to do something dramatic. So we started out with the Chevrolet Camaro which is the born and bred American muscle car, and we took those proportions and we threw it into a crossover. That ideology just bloomed and grew into something that we could make functional.”

The new Chevy Blazer lineup is available in three models. The Blazer RS—is the sportiest iteration. The RS features a honeycombed grill and from the front, resembles the iconic Camaro design.

The Blazer Premier model has a bit more of a sophisticated look with more chrome detailing and a slightly sleeker design. The third version, the Blazer, has the same athletic design but not as much content packaging according to GM reps.

The demand for crossovers—vehicles that combine the features of a car with an SUV or truck— is growing. According to a report from Quartz, crossovers could make up 50% of US car sales by 2020.

That demand means it’s an ideal time for black STEM grads to land prestigious positions at car manufacturers, even if their academic majors may not seem a fit in the industry as Muse found out. He also spoke about how his aerodynamic knowledge led to implementing specific features in the new Chevy Blazer.

Muse says he and his team “worked hand-in-hand with the design team” on engineering functions.

“If you [said] to me, ‘hey we got this fuel economy target,’ I know exactly what, from an aero perspective, I need to do for this vehicle to meet that target,” explains the engineer who also has a pilot’s license.

“But it’s also not going to look as pretty as I want. So I have to work with the designers and say ‘OK well, we have to maintain this feature line and this wheel base and this stance, to make it work.”

Crouching down alongside the vehicle, Muse points out various features. “Underneath the vehicle we have different panels and shielding; we have different features on the front, how we shape it – like this may just look like a little insert piece, but it’s there for function,” he says.

“We reduced the overall pressure on the vehicle. If you’ve even been on the highway and you put your hand out the window and it’s all nice and smooth – and then you turn your hand this way and it’s trying to push [it] up – [it’s] the same thing with a car and that determines your fuel economy.”

“I’ve changed things from wheels to the hood line,” he says. While the goal is to give the Blazer the athletic look, there are other considerations for engineers to work out.

“[The hood’s] height differential is purely driven by aero[dynamics] because if you have air that is flowing up –you might have seen, if you’ve driven in the rain, how the water creeps us and goes up your windshield—that determines at what point the air hits – and that’s a big enabler for aero performance,” he says.

“[We] can’t bring the hood up too much because there’s vision requirements – there’s pedestrian protection requirements – you don’t want to hit someone and then it puts that person directly into your windshield.”

From Ideation to Actualization

Muse says it can take over four years for a vehicle to go from concept to an actual production model.

“We have this design that starts as a sketch and we go to a clay model; figure out what we need to do what concepts we need to add to the vehicle; how do we need to shape it so that we can meet a certain drag number, or aero requirement that automatically translates to fuel economy,” he says.

“There’s so much you have to think about and boxes you have to stay within, but still we have an aero requirement that we need to meet. So you really exhaust all angles. It’s my job to figure out: Can I reduce the pressure of the car, get better fuel economy, and make it quiet while also maintaining the design? And the designer will come in and say, ‘yep, and we are going to make it black because that looks sexy.’”