George Floyd Witness and MMA Fighter Says He was "Shimmying" 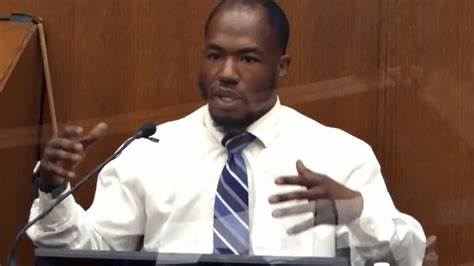 Donald Williams II, a professional fighter and a security guard, testified that former police officer Derek Chauvin’s knee was on George Floyd’s neck, describing the move as a “shimmy.”

On the second day of testimony in the Chauvin murder trial, Williams, who was there when Floyd was being pinned down while under Minneapolis police custody, reviewed the video in Hennepin County District Court. He recalled how he told officers that they should have checked Floyd’s pulse.

As a trained mixed martial artist, Williams identified the severity of Chauvin’s position on Floyd’s neck, the movements of the officer’s knee, and the signals of distress Floyd’s body gave.

“The more you see Floyd fade away, slowly fade away, like a fish in a bag. You see his eyes slowly, you know, pale out,” Williams continued, looking at the video. “His eyes slowly rolled to the back of his head. You see blood coming out of his nose. I felt the officer on top was shimmying to get the final choke in.”

On Monday, Chauvin’s defense lawyer, defense attorney Eric Nelson, tried to object to William’s statement. “The evidence will show that Mr. Floyd died of cardiac arrhythmia that occurred as a result of hypertension, coronary disease, the ingestion of methamphetamine and fentanyl, and the adrenaline flowing through his body, all of which acted to further compromise an already compromised heart,” Nelson said.

When Williams warned Chauvin to ease up on Floyd’s neck, the officer made eye contact with him, but quickly looked away.

On May 25, 2020, Floyd died the same night Chauvin applied his knee on his neck for more than 9 minutes–the cause of death was cardiopulmonary arrest due to him being restrained.

Floyd also tested positive for COVID-19, which means it was difficult for him to breathe on his own.