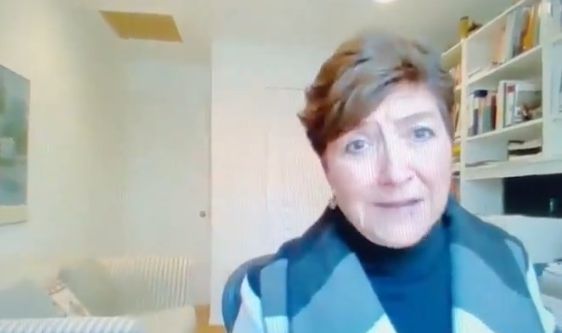 A Georgetown Law professor, who was seen on a video clip speaking about how most of her lower-performing students are Black, has been terminated from Georgetown University.

A video was posted to the Twitter account of Hassan Ahmad where law professor Sandra Sellers is heard, in part, saying, “You know what, I hate to say this, I end up having this, you know, angst every semester, that a lot of my lower ones are Blacks. Happens almost every semester. It’s like, Oh come on, get some really good ones but there also are usually some that are just plain at the bottom. It drives me crazy.”

Thursday, on the Georgetown Law website, William M. Treanor, who is the Dean and Executive Vice President of Georgetown University Law Center, released a letter on the incident to the students.

“As I wrote to you last night, I am appalled that two members of our faculty engaged in a conversation that included reprehensible statements concerning the evaluation of Black students. I have further reviewed the incident and have now spoken to Professor Sellers and Professor Batson, giving each the opportunity to provide any additional context.

According to NBC Washington, Sellers sent Treanor a letter announcing her resignation.

“I am deeply sorry for my hurtful and misdirected remarks. While the video of this incident is an excerpt from a longer discussion about class participation patterns, not overall grades, it doesn’t diminish the insensitivity I have demonstrated. I would never do anything to intentionally hurt my students or Georgetown Law and wish I could take back my words. Regardless of my intent, I have done irreparable harm and I am truly sorry for this. For that reason, I am immediately and voluntarily resigning my position as an adjunct professor.”