Germany and African Tech Startups are Partners in Innovation 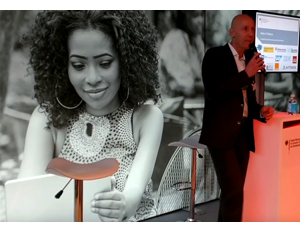 Representative from the German Ministry for Economic Cooperation and Development speaks at the Hub Conference in Berlin. (Image: File)

At the Hub Conference–a technology summit that was held in Berlin on November 22–Germany’s Federal Ministry for Economic Cooperation and Development outlined several initiatives for empowering tech startups and students in Africa.

In attendance was Michael Pittelkow, the Strategic Partnership Digital Africa of the German Ministry for Economic Cooperation and Development, SAP Deutschland SE & Co KG. He spoke about the German government and SAP’s commitment to empowering African startups as well as tapping into the incredible innovation in technology that is emerging across the continent.

“It’s a very vibrant very, fast startup scene,â€ says Pittelkow, a frequent traveler to Africa. “I’ve seen there things I would not have expected. Out-of-the-box thinking is very common, probably because there are no boxes,â€ he said.

According to Pittelkow, the German Ministry’s involvement with the African tech startup scene provides “tremendous opportunityâ€ for all. “It’s about matchmaking; identifying the right startups and scale-ups–[companies already in business]–and taking them to the next level.â€ This matchmaking provides startups the resources they need to succeed, infusing the German business economy with the innovation coming from these startups.

Yet, there are challenges. The primary one being, “How to you identify those [startups] in this fast-moving, fast-changing environment?â€ Pittelkow wondered.

At the conference, a representative from the German Ministry of for Economic Cooperation and Development spoke of several programs dedicated to providing opportunities to African startups, which are already in place or are up and coming. “I was very happy to hear the ministry say, ‘We have an idea how to tackle these challenges,’â€ Pittelkow stated.

He also spoke about the work SAP is doing in concert with the German government to nourish these startups. “My area is…I’m working with governments, but as a company [with SAP], we do a lot with startups,â€ he explained.

“We’re running a special program; we call it a Startup Focus Program, [with] Southern Africa, so far, being the focus. We are going up North now to Sub-Saharan Africa, and together with Germany, we are about to launch a program special for Nigeria. We have a program called Skills for Africa, where we train graduates–African graduates–and bring them into jobs, providing them job opportunities. We’ve educated more than 300 as we speak; we support more than 200 startups. And we’re about to launch [our] IoT Accelerator on December 1,offering African startups the chance to come here to Berlin and work on our premises, to create products ready for market,â€ Pittelkow said.