'Get on Up' Actor Chadwick Boseman Talks Business 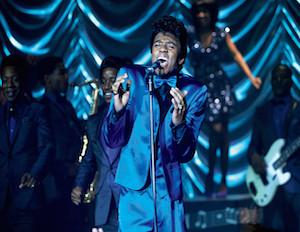 It has been a long time coming for the James Brown biopic. As explained by producer, Brian Grazer, it took more than 10 years to get the effort green lit and accepted by Hollywood.

During that time, the big time shot caller managed to make considerable leeway with the project. He hired a well-known director in Spike Lee, had a script written and approved by the studio, and even had a few actors in mind for the central role of James “Mr. Dynamite” Brown.

Alas, none of that came to be, as Grazer lost the rights to James’ life when “The Hardest Working Man in Show Business” died on Dec. 25, 2006. Not all was lost as the respective rights to produce a film about the Godfather Of Soul would be purchased by fellow Rock ‘n’ Roll Hall of Famer, Mick Jagger of The Rolling Stones. Together, the duo would enlist the directing duties of Tate Taylor (“The Help”) and scour all over Tinsel Town to find the man who would tell the story of Toccoa, Georgia’s strongest compatriots.

Despite all the other films that were in production or in development, “Get On Up” marks an uncompromising look at the life, legend, and mythos of James Brown. Starring Chadwick Boseman (“42,” “Gods of Egypt”) as the soulfully damaged crooner-slash-entrepreneur, the movie tells Brown’s story from the age of 6 to 73, and features electrifying moves, powerful performances, and a compelling look at what it meant to be the most talked about black entertainer in the world.

The director, producers and cast (Nelsan Ellis, Octavia Spencer, Jill Scott and Dan Aykroyd) recently came to New York’s Mandarin Hotel to discuss working on the production. With everyone in attendance all beholden to the allure of James Brown’s explosive life, the featured guests of the day illuminated us with tales of yesteryear (Mick Jagger); their favorite moments and songs (Octavia Spencer, Jill Scott); and the most surprising enterprise created by the Father of the Funk.

Being that Brown came from an impoverished background, he was greatly intent on giving back and making sure he didn’t fall into “the trap”. A certified genius, Mr. Please Please Please created opportunities of employment for everyone around him. He was the first to have the amenities of a luxury car, owned multiple radio stations, and a private jet before it became a part of the rock star lifestyle. With that in mind, Black Enterprise asked Mr. Chadwick Boseman and Mr. Dan Aykroyd about their thoughts on the most surprising entrepreneurial endeavor created by James Brown.

“The most surprising business venture started by James, for me,” Chadwick said, “was the James Brown Food Stamp.” Not too many people knew about that. “He wanted to recycle money within the black community. It was actually a genius idea, unfortunately it’s no longer around.” Brown was adamant about not taking help from outside the black community, so it was his business acumen that created these wonderful ideas that were meant to infuse dollars and sense into African American households around the country.

Dan Aykroyd, who plays Browns’ manager Ben Bart in Get On Up, spoke from experience of knowing the real-life performer when they filmed The Blues Brothers together. “I’m not surprised by anything that James did entrepreneurially. He was just so broad-ranging in terms of how to handle people, how to balance a book, how to make a tour more profitable than any other artist. He just got it and got it from an early age.”

You can listen to the full conference chat below or fast-forward to the 5:05 mark to hear BlackEnterprise.com’s question for actors Chadwick Boseman and Dan Aykroyd.

Don’t forget to get on the good foot when ‘Get On Up’ dances into theaters on August 1.