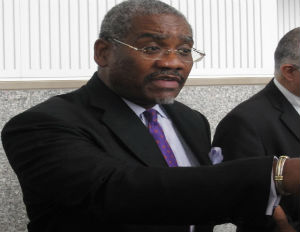 Economic experts agree Africa is the next frontier for investment opportunities.

The boat came and went the first time around and the Chinese were the first to get on it. Now it’s on its way back, U.S. companies are scrambling to get aboard.

By 2030, the continent will have the world’s largest workforce. Forty-three percent of the population is below 14 years old. There is a growing middle-class that doubled from 157 million in 1990 to over 326 million in 2010. Africa has more cellphone subscribers than Europe.

There are about 585 million people across the continent without access to electricity. Africa accounts for a sixth of the world’s population, but generates 4% of its electricity. Less than one in three have power. It’s a continent still in the dark and a goldmine for companies looking to light it up.

Ambassador Bisa Williams, deputy assistant secretary for the Bureau of African Affairs agrees, saying “Nigeria is the most populous and has the biggest economy. But the lack of regulations, consistency, and application of the rule of law constitute some logistical and infrastructural problems. Governments have to make energy distribution a priority.”

So if the time is now to invest, what are African American and other minority-owned businesses waiting for? Meeks offers advice for interested business owners: Ask around.

“They haven’t heard what OPIC (Overseas Private Investment Corporation ) is doing, what Ex-Im is doing or what USAID is doing,” he says. His office is working to get the message out. And members of Congress have reached out to get on board.

“We are reaching out to minority-owned associations and organizations telling them to send folks over,’ Meeks says. “I’ve had colleagues come and ask to do something similar with their minority-owned firms. In Miami,Â Frederica Wilson wants to do something similar. Same thing with Chicago’s Robin Kelly, California’s Karen Bass and Atlanta’s John Lewis and David Scott.”

So how do minority-owned businesses get to the table? The first step is to get them in the same room.