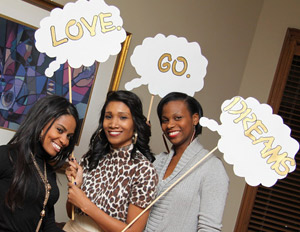 The death (on CW) and resurrection (on BET) of comedy series The Game was a television history maker. The entire ordeal–including fans’ outrage over the cancellation, and their ceaseless support in the show’s return–caused many to question the current state and fate of Black television.

The saga also sparked friends Dana Gills, Asha Kamali May and Jeanette McDuffie to co-found their own production company, Brown Paper Dolls, a mulit-media company that aims to produce content for underserved niche audiences. Their top priority? To look for innovative ways to market milk + honey, an online web series executive produced by actor Idris Elba. The series, which stars Debbie Allen, Lance Gross (House of Payne), Bryce Wilson (Beauty Shop) and Elba, follows four women “who are on spiritual, professional and romantic journeys to make their dreams a reality.â€

BlackEnterprise.com caught up with Dana Gills, one of the the three producers, and talked to her about the evolution of milk + honey, the vision of Brown Paper Dolls, and how the trio plans to execute that vision and get out their dreams.

Black Enterprise: When did you start your company, Brown Paper Dolls, and what is the mission or founding principles?

Dana Gill: We officially started Brown Paper Dolls in January 2010, but have been working together since 2007. Our mission is to create content across multiple media platforms for niche markets that have universal appeal. We strongly believe that there is an opportunity and value in catering to and telling the stories of underserved markets. Our content challenges traditional perspectives, shifts paradigms and provokes discussion.

What inspired your creation of milk + honey, and how long did it take to bring it this far in production? A number of things inspired us to create milk + honey: Lack of diverse images of people of color on the big and small screen, the limited opportunities for black talent in front of the camera, access to opportunities behind the scenes and our desire to create a story that we felt would be compelling and inspiring to our audience. We ultimately wanted to show more diverse images, create opportunities for emerging talent and create a platform that would enable us to tell a universal story of pursuing your dreams and the challenges/obstacles that you face doing so. We have been working on [the series] since September 2007.

What challenges did you face before and after Idris Elba became interested in the project? We were looking to secure an executive producer who would appeal to our audience and help to give the project a wider reach by attachment. Prior to Idris Elba coming on board, we were fine-tuning the script and putting together our cast wish list. Due to a limited budget and this being our first project, we were somewhat limited in our reach, but very resourceful in identifying people who complimented our skill sets and could bring expertise that we needed. Since Idris Elba has become attached, our reach and impact has expanded–we are a good team. Some of the challenges that we have faced is proving that our audience is viable for different networks and that this scripted content [from] new creators is worth the risk.

Why is it so hard to keep good African American programming on television?

Good is such a subjective term. Good to us means a well-developed, multi-layered, character-driven story with diverse images of African Americans. Good to a network executive may mean a proven track record with a built-in audience. Nevertheless, it is important for us, people who want good programming however we may define it, to watch and support the shows that we deem good because that is what will keep them on TV. We have to show that this is the type of content that we are interested in seeing and then we should see better African American programming. Today, for some reason, our stories have not been treated as universal ones even though they are, and we are thought to be able to relate to shows that feature few or no African Americans. So, in turn, many believe it is not necessary to have specific African American programming.

For others working on scripts and hoping to get their ideas looked at, what are some basics they need to know?

It is imperative that you focus on developing the product. The concept and the script will be central to your project’s success. It’s the foundation that everything else will build upon. Stay in the development/writing process for as long as you can. It will determine the leverage you will have when you enter pre-production. If you have developed a strong concept, script and business plan, it will be an easier road when you seek financing and also when you begin to cast.

Are you using the web as an alternative approach to television, a strategy to gain more of a following or to send a message to networks?

The Internet is such a powerful tool that filmmakers have instant access and the ability to share their stories. It really comes down to how can you get your product to your audience? And that answer is the Internet. The model for TV and film is ever changing. As content creators, you have to have a solid audience. That is what distribution partners are looking for and that’s what they need to green light your TV show or film. This is not a new formula or strategy. If you examine Tyler Perry‘s success, he did the same thing. He had a built-in audience before he partnered with Lionsgate to make his films. He did that by pounding the pavement, and getting his product, in his case, his plays to his audience via local theaters all over the country. He had a proven audience. He had the metrics that proved his brand and was able to leverage that in forming partnerships. That audience gave him a seat at the negotiating table. Now, we as filmmakers have instant access to our audiences via the Internet. We can connect with our audience and prove they want our content. As producers, that is an extremely powerful tool when selling your content.

What additional avenues are you taking or planning to take to increase exposure for milk + honey?

There are a lot of ways we plan to build out milk + honey. Essentially it’s a brand and experience. We look at it as a tree with several different branches. We know there’s an audience, and we plan to reach them on all mediums. We’re in the midst of executing strategies– the only thing we can say is, we’re excited to speak to our audience and provide them with fresh content and experiences.

What’s the story behind the name milk & honey? How did you come up with it?

Well of course, we wanted the title to be central to the theme of the show. milk + honey has a biblical subtext. It comes from the bible, more specifically the book of Deuteronomy. The bible notes, the land of milk and honey to represent the Promised Land. The series is all about the journey to your dreams, and all that happens on that journey to your “promised land.”

As filmmakers, there are so many beautiful stories you can tell and so many characters they can live in. We want to diversify the images our audience can see. More specifically, we want to see ourselves and we want our audience to see themselves. In 2011, there are very few channels we can turn to, or movies we can see that reflect our images. We are vastly different, and beautifully unique. We want to make our stories universal. As human beings we have more in common than not. We all want the same things and share the same dreams for ourselves, our families and our world. Brown Paper Dolls looks forward to telling those universal stories in a unique way.

What will it take for milk + honey to go to the level you’d like it to go?

We realize that this is bigger than us. This is something our audience not only wants to see, but is demanding to see. It will take an audience that wants to see this content and a distribution partner that sees the value in that audience for it to really go to the level we would like.

Why, in your words, will audiences love this?

We are milk + honey. Our friends and sisters are milk + honey. This is a story and an experience that has yet to be told. And it has yet to be done this way. What does it take to go after your dreams and find love in the most adventurous places? Can you have it all? We think audiences will love to see our characters answer these questions. They want to see stories that reflect their own. Our audiences want to see beautiful characters that look like them and juggle dreams, love and life. milk + honey is fun, sexy and smart. It also doesn’t hurt that our characters have gorgeous male love interests and know a good Rebecca Minkoff bag when they see it. And if that doesn’t make you watch, Idris Elba will.