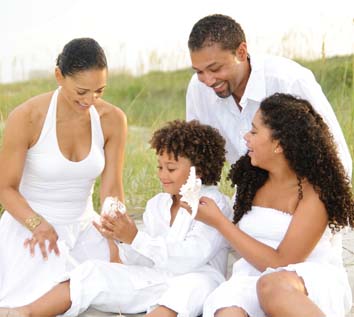 Jennifer Jones Austin thought she just had a stomach virus. The married mother of two and senior vice president of community investment for the United Way of New York City attributed her sickness to her busy schedule. But as Jennifer became weak and suffered blurry vision, vomiting, and temperatures as high as 103.5 degrees over nearly five days, she and her husband, Shawn, knew her illness was more serious.

On Sept. 23, 2009, Jennifer’s diagnosis was in: she had adult acute myeloid leukemia, a type of blood and bone marrow cancer.

“It felt like having all the air sucked out of you,” recalls Shawn, 43, about getting the news. (At press time, Jennifer was hospitalized and unable to comment.) “As the day wore on, it began to sink in and she wondered if she would be around for her kids.”

Jennifer, 41, needed a bone marrow transplant. Her siblings were tested but weren’t a match. The next option was to find one through The National Bone Marrow Donor Program‘s (NMDP) Be The Match Registry.

Currently, the registry is made up of more than eight million people. “We assumed it was no big deal to find a match,” says Shawn. But that would be no easy task. African Americans are significantly underrepresented as bone marrow donors. They make up roughly 7% of the registry, compared with 74% whites and 10% Hispanics.

Because tissue types are inherited, patients are most likely to match the tissue type of someone who shares their racial or ethnic heritage. Currently, the likelihood of finding at least one potential match on the registry ranges from 60% for African Americans to 88% for whites. To increase the chances of finding someone with similar markers, more black people need to register. Donating marrow benefits patients with more than 70 diseases, including leukemia, lymphoma, and sickle cell anemia.

Mary Halet, director of recruitment and community development for the NMDP and its registry, believes bone marrow transplantation has not reached the same level of awareness that other health issues have within the black community. Additionally, there is a perception that donating is painful.  However, registering as a donor starts with swabbing cells from the inside of your cheeks. If later confirmed as a match, you will be prepped for donation, which includes taking a physical exam and giving a blood sample. For the actual donation, the patient’s doctor will choose between two methods, based on what’s best for the patient: bone marrow (a surgical procedure performed in a hospital with general or regional anesthesia) or peripheral blood stem cells (an outpatient procedure similar to donating plasma). Short-term side effects may include headache, muscle aches, or fatigue.

In 2009, more than 50,000 potential African American donors joined the national registry, 5,000 more than in 2008, according to the National Bone Marrow Donor Program. And in some states, expectant parents have the option of donating their baby’s umbilical cord blood. (About 7% of cord blood units on the registry identified as black).

Friends, colleagues, and the community rallied around Jennifer, holding more than 200 events across the country that recruited nearly 13,000 people to the registry. Jennifer received a transplant from umbilical cord blood on Feb. 24. Though at press time she was battling post-transplant complications, Shawn says she is expected to make a full recovery.