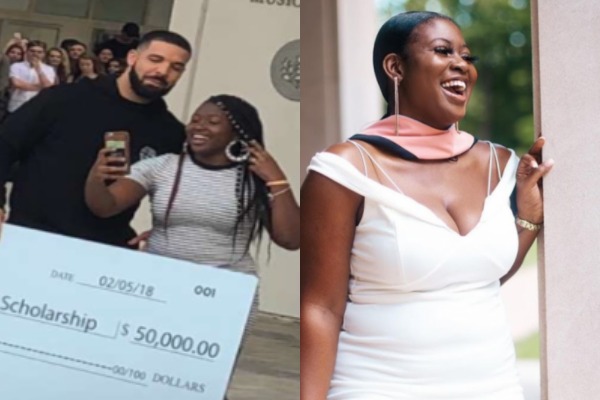 The young woman Drake was seen handing a $50K scholarship to in his 2018 “God’s Plan” music video has graduated with her master’s degree.

Destiny James was among the lucky recipients of $996,631.90 worth of philanthropic endeavors Drake filmed for the catchy rap track. Shot in the city of Miami, the Toronto emcee was seen paying off student debt, buying groceries, giving money to single mothers, and toys to children.

Now, three years later, James took to social media on Wednesday to give fans an update on how Drake’s good deed affected her life.

“Mama, I mastered it. Daddy, I did it 🎓,” she captioned a glam graduation photo tagged at UNC Gillings School of Global Public Health.

Among the swarms of encouraging comments she received, the Grammy Award-winning rapper also sent his love by writing, “LETS GOOOOOOOOOOOOOO DES,” as captured by Essence. The Denmark, South Carolina, native also went viral on Twitter after one user uploaded a side-by-side photo titled “How it started, how it’s going.”

A 2018 tweet from user Ment Nelson outlined a few of Drake’s charitable acts in the music video. “Drake surprised students at Miami Senior High by filming a music video, and donating $25K. He then visited the University of Miami where he donated a $50K scholarship to a random student who just so happened to be Destiny James of Denmark, South Carolina #GodsPlan,” it read.

“Drake just gave me $50,000 y’all. Oh my God,” she said in a video alongside the rapper. He returned the love by kissing her on the forehead.

James completed her undergraduate study at the University of Miami in 2019, the year after Drake awarded her the scholarship. The Sigma Gamma Rho Sorority, Inc member went on to graduate school where she’s set to receive a Master’s of Public Health from the University of North Carolina.