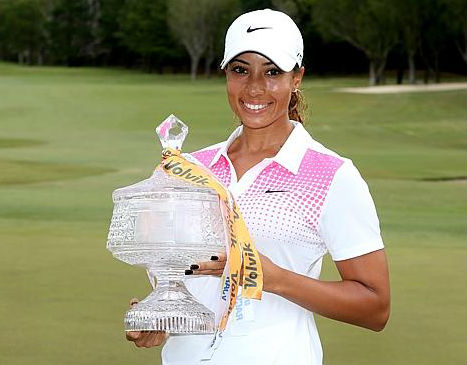 Cheyenne Woods, niece of Tiger, with her first professional trophy at the Australian Ladies Masters Sunday. Golf Channel will re-air her win this week.

Golf Channel will show rounds three and four of Cheyenne Woods’ two stroke victory at this past weekend’s Australian Ladies Masters. The rounds will be broadcast Tuesday and Wednesday between the hours of 11 a.m. and 1 p.m.

Ms. Woods’ claimed her first-career victory on the Ladies European Tour Sunday at RACV Royal Pines Resort in Queensland’s Golf Coast of Australia. She entered the final round with a one-stroke lead and finished the day with a four-under par 69, two strokes ahead of the field.

A Golf Channel spokesman said the network was already scheduled to run third and fourth rounds of select tournaments from the Ladies European tour in 2014 as part of an ongoing partnership. Ms. Woods’ victory was “a happy coincidence for us,” he said.

Golf Channel interviewed Ms. Woods this morning. “It’s been overwhelming this past week, a lot of media attention even being in Australia,” Woods said during an interview Tuesday with Golf Channel’s Morning Drive. “This is something I’ve always dreamed of, winning on the professional level, so I’m really happy.”

In addition to saying she called on her experience as an amateur — she’s an NCAA champion — Ms. Woods also told Morning Drive how much her uncle’s father, Earl Woods was an inspiration to her career.

“I still remember how much he believed in me, and I think that’s what keeps me going and what keeps me fighting to follow my dream and keep getting better and better, because I knew my grandfather had this belief in me and knew I was capable of doing it,” she explained. “He saw a talent in me that maybe at the time I didn’t see.”

As for Uncle Tiger, he gave his seal of approval via Twitter:

Way to go @Cheyenne_Woods ! A great win and accomplishment. I’m so proud of you.

The telecast can be seen on the Golf Channel or on Golf Live Extra, which provides live, streaming coverage 24/7.