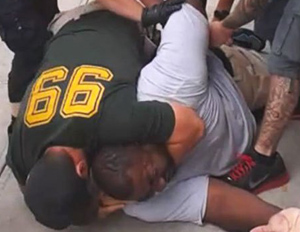 A New York City grand jury has decided not to indict officers in the death of Eric Garner.

Garner, 29, was an unarmed man who died while being restrained and arrested on Staten Island earlier this year. His death was captured on film and instantly went viral after he was heard pleading for his life. The grand jury panel determined that there was not probably cause that a crime was committed.

Roland Martin quickly took to his Twitter page, letting all those within earshot know, “If you think you saw massive protests over the Ferguson grand jury, expect even more with Eric Garner.”

NYPD officer Daniel Pantaleo, who was the man shown on video with his arm wrapped around Garner’s neck, will not face charges. The cause of Garner’s death was “compression of neck (chokehold), compression of chest and prone positioning during physical restraint by police,” according to reports. Although Garner’s death was ruled a homicide, it was the video showing the unarmed black man with both hands raised in the air that has many in an uproar.