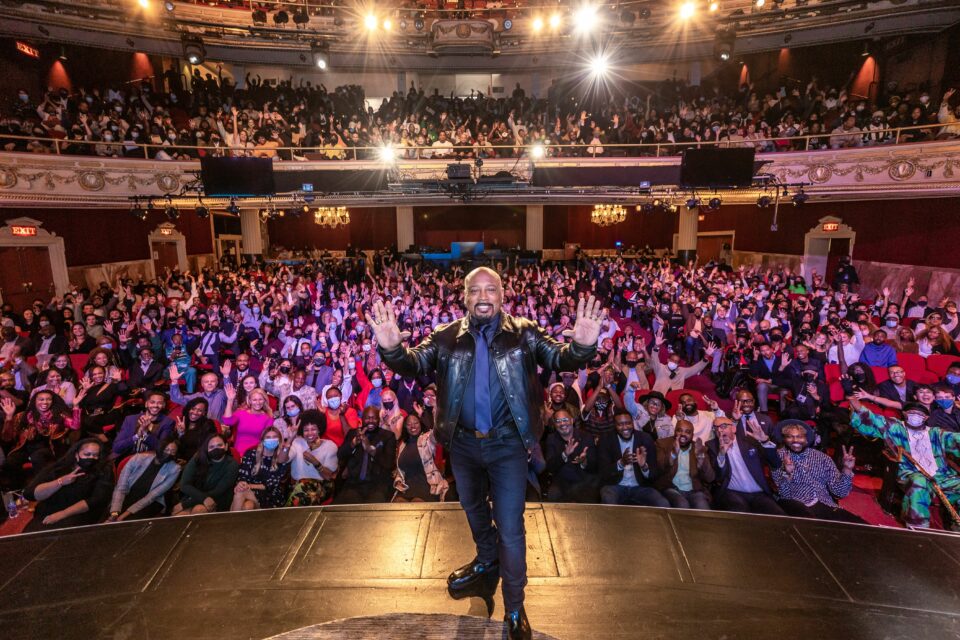 Disclaimer: This story has been republished with permission from Entrepreneur.com

Daymond John remembers hawking hats outside the historic Apollo Theater in the ’90s. After selling his wares, he’d return home, turn on the television and watch Showtime at the Apollo.

Now, he takes the stage to packed crowds.

“It feels like a full circle moment,” the FUBU founder and Shark Tank star told Entrepreneur.

John is hosting the third annual Black Entrepreneurs Day Presented by Chase at the Apollo Theater in Harlem on Oct. 27. The event will feature several iconic Black entrepreneurs, including Shaquille O’Neil (who has a franchise portfolio worth more than $100 million), tennis champion Venus Williams, Academy Award-winning director Spike Lee and many more.

This year, the event will be giving away $150,000 to Black entrepreneurs and business owners through the NAACP Powershift Grant. Applications for the grant and free tickets to the event are available on BlackEntrepreneursDay.com. The event will also be live-streamed.

Entrepreneur talked to John about Black Entrepreneurs Day and what it takes to get a shark to invest in your company.

What can viewers and attendees expect this year at Black Entrepreneurs Day?

This year, we added a pitch competition, a Shark Tank-style event where people can pitch their businesses. Unlike Shark Tank, though, it is free money. You can make mistakes with this money. We aren’t taking any percentage of your company, no equity, it’s just a grant saying we believe in you and your business. We also have conversations with entrepreneurs who have [won] Oscars and [championships] like Spike Lee and Venus Williams.

What are you looking for in an entrepreneur?

I’m looking for people I can relate to. People I want to be in business with. I don’t care if you are applying at my office to be an assistant or asking me to invest $1,000,000 in your company. I treat everyone the same if I believe you have an opportunity to grow.

What are some of the most common mistakes you see first-time entrepreneurs make?

They spend too much money too early. It’s important to educate yourself and learn how to avoid landmines ahead of time. In the Black community, many people don’t have financial literacy. Our families didn’t come from legacy wealth, and when we make money, we might spend it on the wrong things.

Spending on business or spending in general?

Both. Another mistake I often see is over-funding. Entrepreneurs will take a $100,000 loan to open a big store when really what they needed was $1,000 to open a Shopify page. They make money, but then don’t know what to do with it.

Have you had any money failures that you’ve learned from?

Are there any deals you regret not making?

No, we get so many offers, I don’t have any regrets. But I do have buyer’s remorse sometimes.

No, I wouldn’t do that to any entrepreneurs. But I’ve invested in several companies where I have regrets. If I made an investment in your restaurant, but I’m in the back in the kitchen washing dishes and cleaning, I’ve made a mistake.

Is there anything outside of work that helps you as an entrepreneur? You’ve said on Shark Tank that you enjoy fishing as a hobby.

I don’t have a fishing hobby…fishing is life. All of this, everything I do, Shark Tank, the investments, pays for fishing. I fish every morning. It brings me joy. Entrepreneurs definitely need an escape, whether you’re running the Chicago Marathon or practicing yoga, [it] will help you [be a better] entrepreneur. For me, it’s also family. I’ll be in the air for 12 hours just to see my little girl for eight hours. Being with her helps me stay grounded.

Would you ever consider investing in a fishing company?

No, I wouldn’t want it ruined by having to deal with Kevin[O’Leary] and Barbara [Corcoran].

*This interview has been lightly edited and cut for clarity.