Hillary Clinton Surprised Everyone at Black Girls Rock, Here's What She Had to Say! 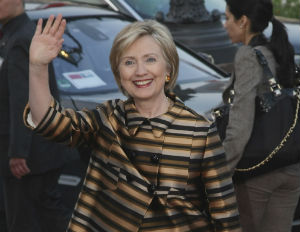 This year marks the 10th anniversary of the awards show, which honors black women in the entertainment industry.

Stars such as Tracee Ellis Ross, Amandla Stenberg, and Rihanna were also in attendance, while Monica and Jazmine Sullivan performed.

Clinton was greeted with a standing ovation as she walked onto the stage. “The entire world knows what you know, and that is, black girls rock!,â€ Clinton proclaimed to an approving audience.

“Black women are change makers and path makers and ground shakers,” Clinton said. My life has been changed by strong black women leaders, from Marian Wright Edelman to Dorothy Height to Maya Angelou.”

Clinton went on to address the systemic inequalities black women face every day.

“There are still a lot of barriers holding back African Americans and Black women in particular, so a gathering like this filled with so many powerful, strong women is a rebuke to every single one of those barriers. All of our kids, no matter what zip code they live in, deserve a good teacher and a good school, a safe community and clean water to drink.â€

Black Girls Rock! will air on BET on Tuesday at 8 p.m. EDT.