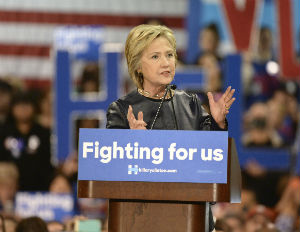 On Wednesday, Hillary Clinton held a rally at the historic Apollo Theatre in Harlem, New York.

Harlem resident Renee Elise Goldsberry, known for her role in the Broadway hit Hamilton, sang the national anthem. Harlem icon, 85-year-old Congressman Charles Rangel, was also in attendance, dancing across the stage with supporters as they waited for Clinton to take the stage.

“She may not always talk like us Brooklynites talk,” Schumer said, obviously referring to Sanders’ trademark Brooklyn accent. “But when she speaks out, she changes minds, she changes hearts, she moves to action and she changes outcomes.”

As Clinton took the stage to chants of “Welcome home, Hillary” and “Madam President,” she was visibly at ease and in her element with the Harlem crowd.

Clinton’s speech focused on inclusivity and equality, touching on both gender and race.

She also condemned the language coming from certain GOP presidential candidates, calling Trump’s operation a campaign of “bluster and bigotry.”

To drive her point home, Clinton closed out the rally with a sobering story of a Muslim first responder who died while providing medical assistance to 9/11 victims. Clinton explained that because his body was buried beneath the ruble, he was reported missing and immediately considered a suspect in the attacks. Although his body was eventually found and he was declared a hero, Clinton stressed the dangers of unfounded assumptions and prejudices of this nature.