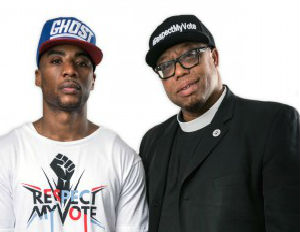 With history-changing campaigns such as Vote or Die and Voice Your Choice under his belt, Rev. Yearwood is no stranger to mobilizing young voters. He often appoints celebrities as spokespeople and ambassadors for his get out the vote campaigns, using their platform and fame to make the electoral process more appealing to young people. Yearwood also uses celebrities to attract another, often ignored portion of voters: ex-offenders.

“We really wanted to engage ex-offenders, so we brought TI, who is also an ex-offender, on as one of our spokespeople. And then in 2012 we did it again with 2 Chainz who is another ex-offender.”

“In 2016 the issue hasn’t gone away. In some places, you still can’t vote if you’re an ex-offender. So even if you’ve done all your time, paid your debt to society, there are still all of these restrictions. And so we’re going to go with another celebrity who is an ex-offender to lead the 2016 campaign, Charlamange Tha God.”

Not all celebrities are equally supportive of attempts to engage young voters. In October 2015, Sean “Diddy” Combs, had some choice words for the movement he helped create, Vote or Die. Describing the electoral process as a “scam,” Diddy argued that “we get disenfranchised, [we’re] disconnected because nothing that they’re saying actually relates to us.”

When we asked Rev. Yearwood about Diddy’s comments, he nodded in understanding.

“We created one of the best campaigns ever. We felt it was something that would go down in American history asÂ  something that really changed the culture,” Rev. Yearwood said.

Citing “Citizens United” and the influx of money that followed, Rev. Yearwood explained that Diddy was coming from a place of disenchantment with a political process rife with voting restrictions such as “archaic Jim Crow-type laws inflicted on ex-offenders.”

“This is my thing, I love Diddy. And I, like many artists, think we need to have real discussion about the political process. And I appreciate that he put that forth, that we can’t just be talking about voting, but not be engaged. He’s saying we have to be engaged in the political process on Nov. 8th, 9th, and beyond. And I think that’s commendable. And the Hip Hop Caucus will definitely do that. We will ensure that people are getting to the polls, and that once they get there they are still informed on the issues of today such as healthcare, education, etc.”

Rev. Yearwood also shared his thoughts on how to capture the young vote:

To find out more about the Hip-Hop Caucus and RespectMyVote, voter drives, voter registration, and future events, head to Hiphopcaucus.org!