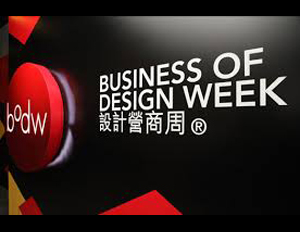 Hong Kong–a metropolis for finance, technology, fashion and design. It’s a place that’s bursting at the seams with progressive people and a rich culture, as well as reshaping the idea of the future in many aspects. It’s also the place that hosts the annual Business of Design Week (BODW), which brings together the world’s most influential design leaders to inspire an audience’s creative and technical approaches to design. BODW 2015 was held from November 30Â to December 5.

[RELATED: 5 Conferences for Entrepreneurs in 2016]

For BODW, design has no limitations on geographical regions or industries. Everything from fashion to product design and architecture to automotive was discussed during the symposium’s week-long events. Thought-leaders and innovators from brands including Coca-Cola, Kickstarter, Moleskine and PwC, among many others, contributed their knowledge and foresight of how design greatly impacts business. According to Mr. Victor Lo, chairman of the board of directors for Hong Kong Design Council (HKDC), speakers were chosen “not just by their names, but also by their influence, and all moderators are carefully selected.â€ Additionally, countries such as Switzerland, Barcelona, Malaysia, Canada, and Italy were represented, which enhanced the global prospective and conversation about design theory and influence.

Since its inception in 2002, BODW has been aimed towards challenging design trends, teaching businesses how to incorporate creative and technical design ideas into their overall business model, and engaging with people from around the world to exhibit how art knows no languages, cultural boundaries or political agendas. The attendees of BODW represents many areas of business from actual designers (graphic and architectural) to technology innovators and philanthropists. For the attendees, design is the common ground for their discussions, but everyone brings their own perspective on how the global economy is shaped from the ideas of what’s next in design.

Twenty percent of the audience for BODW is composed of students at various levels of their education. This demographic shows that younger minds are paying very close attention to design and business and are very interested in participating in the conversation. BODW presents opportunities for these students, who are eager to re-design the world according to their ideas of the future, but more importantly, the symposium provides them with guidance and education on the right way to pursue their ideas of design. “Millennials should build both the left and right brain [in terms of understanding design]. [A lot] could get lost in education … learning by doing is the only way to do this. [With design] either you’ll fail a lot or learn a lot, fail fast or learn fast,â€ says David Butler, VP innovation and entrepreneurship for Coca-Cola.

Another demographic was represented at BODW–women. Women in design (beyond fashion) appears to be a well-kept secret. However at BODW, not only were women on various panels, they also represented the heads of companies, which showcased their leadership abilities as well as their influence on global design. It’s not always easy for women to hold high positions at mega brands, especially at globally-attended events such as BODW, but people like Maria Sebregondi, VP brand equity and communication for Moleskine, are shattering those notions. “It’s not easy being in my position. It was difficult being the only woman. I was the only woman on the board until this year, now there’s two. In Italy it’s not so easy, period, as a woman to get ahead.Â Strongly follow your passion. Follow your dreams. You can’t count on any other kind of leverage. Collaboration with other women is very important.â€