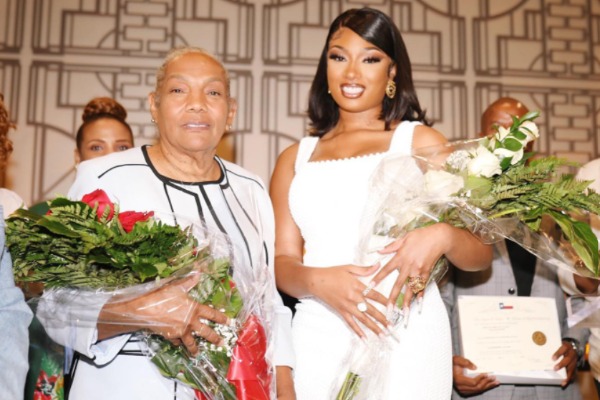 Megan Thee Stallion‘s hard work and dedication to the city of Houston has paid off in the form of her own day and a key to the city.

On Sunday, Mayor Sylvester Turner held a ceremony awarding Megan a key to the city and declared Monday, May 2, 2022, as ‘Megan Thee Stallion Day’ in the city of Houston, Click 2 Houston reports. The date commemorates the birthday of Megan’s late mother, Holly Thomas.

“Came home real quick to get THEE KEY TO THEE CITY 🤘🏾 and in honor of my mother and grandmother’s birthday MAY 2ND is officially MEGAN THEE STALLION DAY IN HOUSTON TX,” she captioned her post.

She went on to thank the mayor for the major accolade and vowed to “continue to give back to the city that made me who I am today.”

Born Megan Pete in San Antonio, Texas, on February 15, 1995, the Texas native has always attributed many of her accomplishments to the city of Houston. It was her late mother who served as her initial inspiration as a female lyricist.

She graduated from Texas Southern University while climbing up the music charts. Mayor Turner selected the Grammy award-winning rapper because of her philanthropic contributions through her non-profit Pete and Thomas Foundation.

Named after her parents, Megan uses the foundation to strengthen education, housing, health, and wellness in the community.

“Megan Thee Stallion has an extraordinary entertainment career, but we wanted to honor her for what she does offstage to lift people’s lives in underserved communities,” Turner said.

“She assisted people after the 2021 winter storm, during the pandemic, and helped those struggling with homelessness. I look forward to watching her grow as an artist and humanitarian.”

As part of her key to the city ceremony, Megan awarded three people $5,000 each to go toward their personal endeavors.