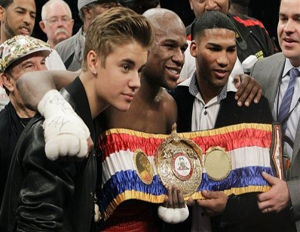 Whether you love Floyd “Moneyâ€ Mayweather Jr. or not, there’s no doubt that he’s playing for the right team, #TheMoneyTeam. He has the charisma and talent to back up his fearless demeanor, as well as the ability to make millions of people pay to watch him duke it out. Mayweather, an eight-time world champion, is doing what no other boxer in history has done, not even Muhammad Ali.

The pay-per-view champion collected a guaranteed $45 million for his latest fight with Miguel Cotto. It’s a purse that beats Nevada’s prior record of $30 million, which was achieved three times by Mike Tyson in both of his fights against Evander Holyfield and another against Frank Bruno. Based on salary alone, the 35-year-old boxer is the highest paid athlete in the world, according to ESPN magazine. Â His multitiered brand has spread beyond the boxing ring, amassing an online following that rivals tech heavyweights and influencers. (His Klout score weights in at 84.)

Having a lot of people follow you online is not enough, you have to turn your following into value. On game day, pop singer Justin Bieber tweeted:

The Money Team, Mayweather’s crew of friends and fans, follow the boxer’s social media interactions closely. One of May’s latest followers (and quite possibly one of his most influential crew members), Bieber, flew to Las Vegas from Los Angeles to be a part Saturday night’s festivities. The teen sensation’s appearance with Mayweather set the Twitterverse ablaze. The professional boxer has been able to increase his brand awareness, capitalizing on his talent and popularity.

While Mayweather has had a few social media hiccups like when he tweeted that New York Knicks’ Jeremy Lin wouldn’t be getting as much attention if he was black, you can’t ignore his overall social media rapport. Â Here are a few lessons straight from a page of Mayweather’s branding book:

Focus on your craft first, the rest will follow

With a professional record of 43-0, Mayweather is not to be messed with. He’s landing punches in both the boxing and digital ring. Just check his stats. The boxer serves as his own promoter on social media, and took a hold of his own promotional efforts when he founded Mayweather Promotions.

Mayweather’s talent, stage presence and business acumen translates into a brand with a net worth of over $100 million.

Use your social networks to connect with people in real time

In addition to connecting with his fans inside and out of the ring, the famed boxer gave his network intimate access to his training routine via his website FloydMayweather.com, where he live-broadcasted a full-day of training as he prepared for his fight with Cotto. He uses his Facebook, Twitter, YouTube and Instagram accounts to connect with his followers daily.

At the core of every successful brand there is a value proposition, something that people connect with and are willing to spend money and time on.Â  Mayweather has given fans total access into his lifestyle through his social media prowess and reality-tv show 24/7 on HBO. Whether you agree or not with how Mayweather flaunts his assets, the boxer has turned his popularity and social media presence into hard dollars.